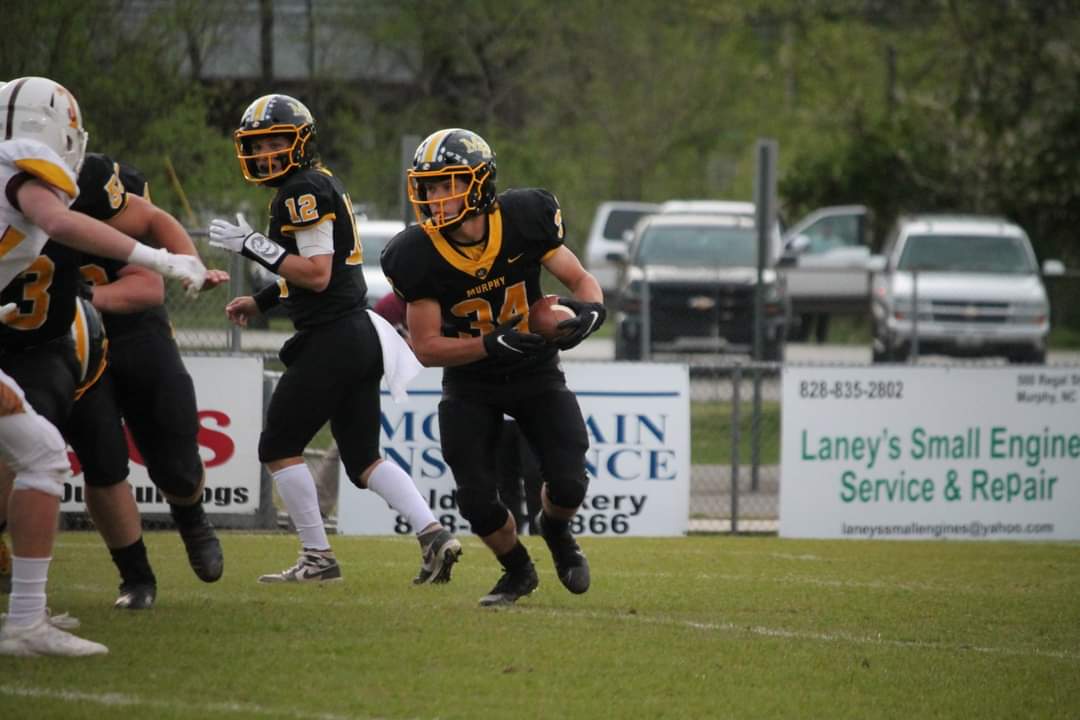 (Blue Ridge, GA) – – With a Rebel yell, more, more, more!  More good football is on the way for the Murphy Bulldogs (2-1) and the Fannin County (GA) Rebels (1-2) this week in Blue Ridge, Georgia.  There may be a few Rebel yells as well as a few Bulldog barks coming from this game.

Fannin County’s Rebels are looking for a second win of the Fall after nailing the Pickens County (GA) Dragons 36-to-13 last week.  Earlier this year the Rebels started out a game most people believed would be a “W” against Union County.  Tough defense and some offensive grit pulled the Union County Panthers to a 14-to-7 win over the Rebels.  The following week Gilmer and Fannin County traded touchdowns to end with a 49-to-35 win for the Bobcats.  The Rebels shook the cat-scratch fever and posted an impressive 357 yards of offense, which was mostly passing (186 yards) over the rush (171 yards).  Pickens County had some impressive passes and stopped the Fannin County by getting into the backfield a few times.  The Rebels were a little too much for the Dragons.

The Rebel yell from Fannin County will be “Corbin Davenport more more more.” Watch for number 8, Davenport, a former Bulldog from back in the day to do lots of work for the Rebels.  He has been averaging more than 150 yards of all-purpose offense, more receiving than rushing.  Fannin Coach Chad Cheatham will shift players around to fit the need rather than push players into fixtured spots.  Davenport may appear at Halfback in the single set spread offense, and you may even see him sprint for a bubble or slip screen pass as a Wide Receiver, which has been some bread and butter for the Rebels.  So keep your eyes peeled for 8.

The Rebel defense will present some unique looks.  Fannin County has been showing three down linemen and sometimes scattering defenders to show two Linebackers.  Murphy must take care of the ball and watch its step as well as recognizing when the Rebel defense makes a shift.  Fanning County gave up 120 yards passing last week with Pickens County and limited the rush to less than 100 yards.  Overall the Rebels were able to keep the Dragons contained.  This tells us the defense has some skill as well as enormous size on the line.  Offense and defensive front linemen are big with a 245-pound average size.  Only one man, Logan Long (Nose guard/Offensive Tackle) appears to play both sides of the ball.  This should be a good luxury for Fannin County with a 63-man roster.

Murphy Quarterback Cole Laney was once teammates with Fannin County Quarterback Corbin Davenport.  His brother, Murphy Running Back/Linebacker Ty Laney, going out for injury last week will place some new faces in the backfiel.  Look for the Bulldogs to run Sophomore Jonah Hedden and Junior Trenton Russell to cover for Ty. Regardless, Cole says Murphy has put in a good week of practice and ready for the next challenge.

Murphy has not faced Fannin County for a decade.  Sixty years ago the schedule was not made without Fannin County or what was West Fannin County.  Murphy played a Fannin County school from 1962 to 1975 and led the series 12-1-1.  Murphy would not schedule a Fannin County team for more than three decades (1976 to 2010).  Murphy resumed the seriesin 2010 with a 55-to-21 win over the Rebels.  The Bulldogs suffered a 28-to-34 loss in Blue Ridge during the 2011 season on its way to an 0-3 season start.  The defending 1-A State Champion Bulldogs would go back in 2012 and defeat the Rebels 42-to-13.  This week’s game will be the first meeting since that game.  (Credit Dustin Stalcup on the Murphy Football History).   Regardless of history, Murphy Head Coach Joseph Watson says this week’s game will be challenging. 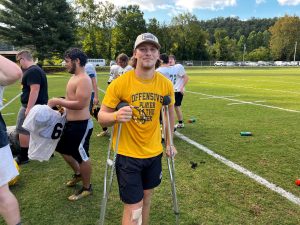 Bulldog fans are still in a state of disbelief and prayer after Ty Laney suffered a broken right leg in last Friday night’s 34-to-28 win over defending Tennessee 1-A State Football Champion South Pittsburg Pirates.  Nothing can keep Mr. Tyler Laney from going back to watch practice and support his brother Bulldogs.  Walking with crutches and supporting a warm smile, Ty shared with us his recovery is going well and he feels good.  Ty can tell you all about it and he has a few words for Bulldog fans who have kept him in your prayers and thoughts.

Team FYN Sports will be on site to cover the game.  However, streaming through FYTV.com will not be available.  Stay connected to our Facebook page and website for updates and game summary.