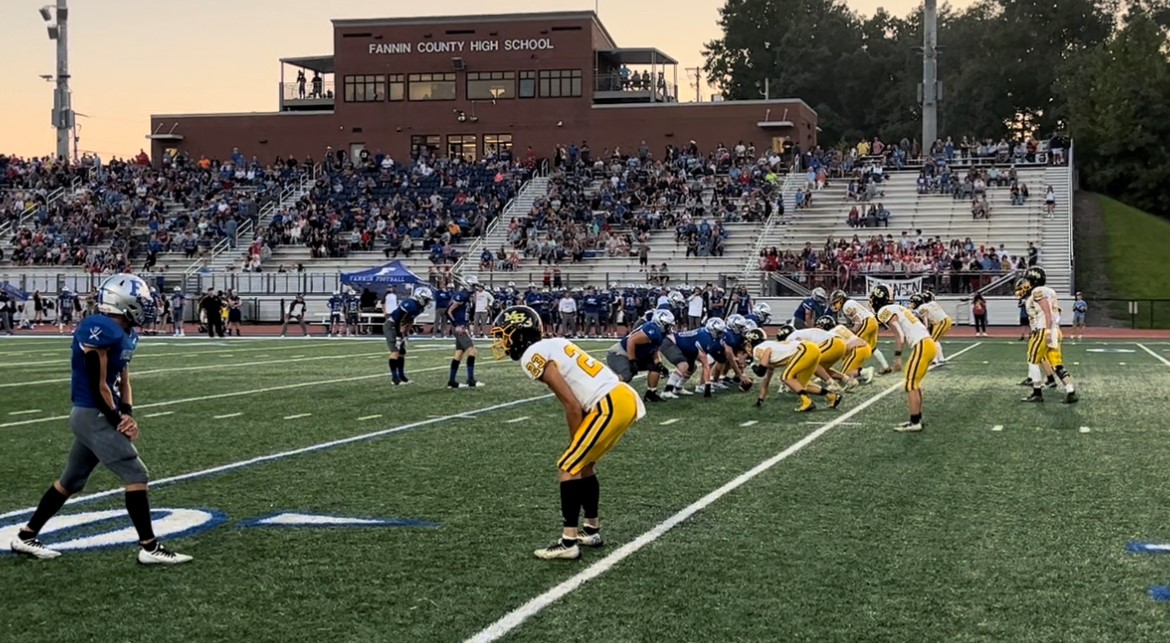 (Blue Ridge, GA) – – Fannin County Rebels (2-2) took hold of the game and didn’t let go over the Murphy Bulldogs (2-2).  The Rebels Carson Callihan led Fannin County to the end zone on the first of eight first half touchdowns with only 10:49 remaining in the First Quarter.  The first touchdown came like the rest, Fast and Furious on a number of Bulldog miscues and turnovers.  Less than two minutes later at 8:49 to go in the First Quarter Senior Corbin Davenport strutted to touchdown town from 27 yards out making the run look easy.  Fifteen seconds later Callihan would intercept a Murphy pass from Quarterback Cole Laney to go back to the end zone.  By the end of the First Quarter, Fannin County led 35-to-0.

Fannin County hurt Murphy with a similar First Quarter showing in the Second Quarter.  The Bulldogs suffered another blow by losing Tight End Will Johnson to a knee injury.  Johnson had been one of the brighter points for the Bulldogs will good pass reception to move Murphy up the field.  Murphy melted some clock time to climb into the end zone on a Hunter Stalcup 6-yard touchdown run with 6:42 to go in the quarter.  Will Joyner nailed the point after kick and made the score Fannin County 35 Murphy 7.  Hope to revive the Murphy offense came when Stalcup intercepted Fannin County Sophomore Quarterback Ellijah Weaver.  As soon as Murphy took possession, the Bulldogs fumbled and set up a two-play touchdown run for Senior Running Back Khole Green to start the new attack by the Rebels.  Rebel’s Bryson Holloway and Corbin Davenport would go back to touchdown town to end the half Fannin County 56 Murphy 7.

Time is the big enemy to the Murphy Bulldogs in the second half, in addition to losing Johnson to injury and the 49-point gap to the Rebels.  Through the second half the Bulldogs faced a rolling clock situation, which has not been enforced on Murphy as the trailing opponent since 2006 when the Franklin Panthers won a lopsided 50-to-6 game in the Pitt.  Regardless, a rolling clock has been rare as a blue moon for the Bulldogs.  Murphy warmed up its offense to post 23 points in the second half, which was not enough to overcome the Rebels.  Three times Cameron Grooms went to the end zone for a touchdown either on a pass or run.  One run was called back on penalty for a Murphy block on the back side of the play.  Grooms would have earned a “pick-six” after he intercepted Fannin County deep in Rebel territory.  Murphy’s Senior Wide Receiver Dozer Mashburn took in the other touchdown to complete the Bulldogs’ scoring in the second half.

New weeks are on the horizon for both Murphy and Fannin County to break even with their season records.  Fannin County will begin Region play in Calhoun, Georgia against Gordon Central.  Gordon has struggled with an oh-and-4 start to its season.  Murphy will finally return to Bob Hendrix Stadium/David Gentry Field with a final non-conference game against the New Faith Christian Academy Titans.  The Titans are 1-and-1 this season.  Georgia Force gave New Faith Christian Academy a 30-to-nothing loss on August 19th.  Since that time it has played one other game reported on September 1st according to MaxPreps.  Stay connected to Team FYN Sports for more details on these games and others.