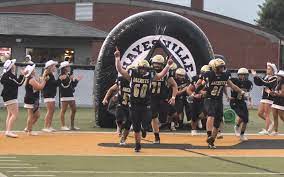 (Hayesville) – – How does taking the bitter sting of a heavy-handed loss or the sweet taste of a scoring victory build value to opposing teams in Week 8 of western North Carolina football?  It’s a means to build each team’s skills to face teams in the state’s most competitive conference and explore new skills.  Hayesville (4-2 and 0-1) is working on ending a two-game losing streak after a lopsided 50-to-Seven loss to highly skilled and undefeated Andrews Wildcats (6-0 and 1-0).  Murphy (4-2 and 1-0) is building its skills and looking to extending its winning streak to 3 games after defeating Cherokee (1-5 and 0-1) 49-to-14.  What did they learn?

Defense is the key building block that came from the Andrews game for Hayesville.  It was not a good first half or beginning for Andrews and the Yellow Jackets did not waste any opportunity to hold the Wildcats by the tail.  Hayesville controlled the game tempo through the first half by stifling Andrews until it could reach the 5-yard line with about 3 minutes to go in the First Quarter where Austin Martin ran his first of four touchdowns.  Hayesville evened the score and playing field with its own touchdown from Michael Mauney halfway through the Second Quarter.  The Yellow Jacket defense did an excellent job to hold off Andrews for a final Austin Martin touchdown just before the Halftime break.  Hayesville seemed to be more charged up for the Andrews game.  Its defensive position and assignment play was somewhat improved over the Tuscola game in the prior week. The Hayesville defense will be a formidable challenge to the Murphy Bulldogs this week and may be tough to launch a pass against.

The best athlete on the team is probably Quarterback Logan Caldwell.  He has been the playmaker for Hayesville and is on track to possibly make the one-thousand-yard club for passing yards.  Passing may be the way to go for Hayesville.  Most of its run plays will probably go through the B-Gap where Senior Tackle Jeremy Graves opens the hole for Senior Running Back Kyle Lunsford or Avery Leatherwood.

The Cherokee win last week was a good game for Murphy to continue to build its team and play “Next Man Up” football.  The Bulldogs have had their minds set on who will replace the injured Running Back Star Ty Laney and Tight End Will Johnson.  The easy answer is Rhinestone Cowboy Hunter Stalcup has taken the lead for the Bulldogs.  After finding its grip on the football on a few loose plays, penalties, and called back touchdowns, Murphy realized it could pass the ball and do it well.

Quarterback Cole Laney is hitting the mark with Cameron Grooms, Hunter Stalcup, Dominick Rummler, and Dozer Mashburn.  At the end of the night Murphy completed 148 of the 445 offensive yards from passing.  The passes were not just short hot routes or screens passes.  The pass plays averaged 75 yards and took the Bulldogs to Touchdown Town.  This process to get a good pass has not always been there for Cole Laney.  Last season stepping into Quarterback for Laney was scary and shaky because he didn’t have a lot of reps.  This past summer you could see he had worked on his passing game and the accuracy was coming on strong.  Cole Laney has a laser-like throwing ability.  He explains how this has come about this year.

Getting the first Smoky Mountain Conference win for Murphy was a good feeling for Head Coach Joseph Watson.  He says the journey is going to seems short and will be challenging.

Team FYN Sports will not have streaming coverage of the Hayesville versus Murphy.  We will keep you informed of the scoring on our Facebook page (