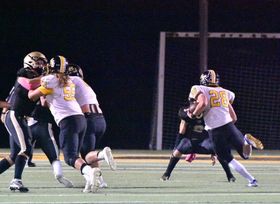 Penalties Added Up to Two and Half Football Fields

(Hayesville) – – There isn’t enough detergent in western North Carolina to keep the officials flags clean after the football game between Hayesville (4-3, 0-2) and Murphy (5-2, 2-0).  27 penalties that backed them up 240 yards were called during the game for infraction ranging from offside and illegal blocks to pass interference to personal fouls.  The game didn’t appear to be chippy between the teams, it was a series of simple mental mistakes players shouldn’t make at this time of the season, which resonated with coaches and players after the game.  The offensive momentum appeared to favor the Murphy Bulldogs going to the half with a two-touchdown lead, when Hayesville struck gold on a touchdown pass that made the score 14-to-7.  Thirteen times the Yellow Jackets and Bulldogs were penalized through the first half, and most were costly or challenged the offensive steam for each team.

The offensive momentum came from the Bulldogs through the first quarter even though Murphy started with the football and fumbled to Hayesville’s Logan Caldwell.  The drive was filled with four penalties that resulted in the Yellow Jackets punting to Murphy.  The Bulldogs utilized 14 plays and went 96 yards to the end zone on a 35-yard Hunter Stalcup run.  Prior to the game and through the week Rhinestone Cowboy Stalcup battled strained hamstrings but was ready to run in this game.  Will Joyner nailed the point-after-touchdown kick (PAT).

The next possession for Murphy crossed into the second quarter after Hayesville failed to make it to the end zone on 7 plays.  Murphy marched the ball to the one-yard line and allowed Quarterback Cole Laney to roll into Touchdown Town.  Joyner hit the PAT.

The Hayesville Yellow Jackets looked like there was no steam behind its offense and surprised the Bulldog defense with a 39-yard pass play from Quarterback Logan Caldwell to Kyle Lunsford that brought fans to the edge of the bleachers.  Isaac Chandler hit the PAT for Hayesville.  To end the first half, Murphy’s Will Joyner attempted a 33-yard field goal that went wide left.  The halftime score was Murphy 14 Hayesville 7.  The lead didn’t change in the second half, the points swelled slightly.

Hayesville started the second half with the ball and burnt nine minutes of clock time and 16 plays that had the Bulldog defense rallying to stop the elusive rushing by Taylor McClure.  McClure led the Yellow Jackets down to Murphy’s 16-yard line before fumbling and giving new life to the Bulldogs.  Both Murphy and Hayesville were plagued with false starts, miscues, and procedure penalties that kept the momentum volleying between teams.  During its possession, Murphy also ran down the clock with its own 16-play version of Hayesville’s unsuccessful sprint to the end zone.  Murphy gave up the ball after being unable to make first down at the Yellow Jacket’s 27-yard line.  Hayesville went five plays and Logan Caldwell tossed an interception pass to Murphy’s Wyatt (Squid) Simmons that almost resulted in a touchdown.  In the end it did one play later with Hunter Stalcup carrying the ball into touchdown town for Murphy’s final score at 6:57 left to go in the game.

With almost 7 minutes left to go, Murphy coaches began to preach ball control and taking care of the plays as there was enough time for Hayesville to score and possibly mount a comeback.  Quarterback Logan Caldwell orchestrated a good pattern of rushing and passing to help Hayesville maintain possession and get back to the end zone one more time on a four-yard run, which was not enough to win the game.  Isaac Chandler hit the PAT to make the final score Murphy 21 Hayesville 14. 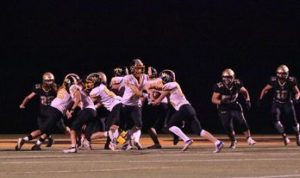 There are too many small issues in this game that are giving concern to the Murphy Bulldogs.  On paper the Bulldogs posted good numbers and proved it has a solid team.  Quarterback Cole Laney had a good night passing by completing 10 of 14 passes for 114 yards and the rushing posted 243 yards off 32 carries for almost 8 yards per play with Hunter Stalcup making up 168 of those yards.  Too many penalties haunted the Bulldogs for illegal blocks, procedure, pass interference, holding, and personal fouls.  The consequence was Murphy could have probably posted more points according to Head Football Coach Joseph Watson

It’s back to the drawing board this week to work out those mistakes to make the game flow better says Quarterback Cole Laney.

Rhinestone Cowboy Hunter Stalcup played through some pain.  This week hamstring issues took him out of practice and caused him some discomfort going into the game.  Normally you rest and let those muscles go through the healing process.  Hunter took to the field and ran through the star-spangled rodeo and his smile can hide all the pain but when he dreams of things he’ll do with the football tucked inside his shoe…

Cameron Grooms had 3 receptions for 69 yards

Hunter Stalcup had 2 receptions for 17 yards

Trenton Russell carried the ball once for 17 yards

Kyle Lunsford had 2 receptions for 47 yards (1 for Touchdown)

Avery Leatherwood had 2 receptions for 43 yards

Michael Mauney had 1 reception for 12 yards

Tate Roberts had 1 reception for 10 yards

The Hayesville Yellow Jackets will travel to Swain County (3-4, 0-2) this coming week to face the Maroon Devils.  Murphy will travel to Robbinsville (6-1, 0-2) to face the Black Knights.  Stay connected to Team Fyn Sports for the latest coverage of both games.