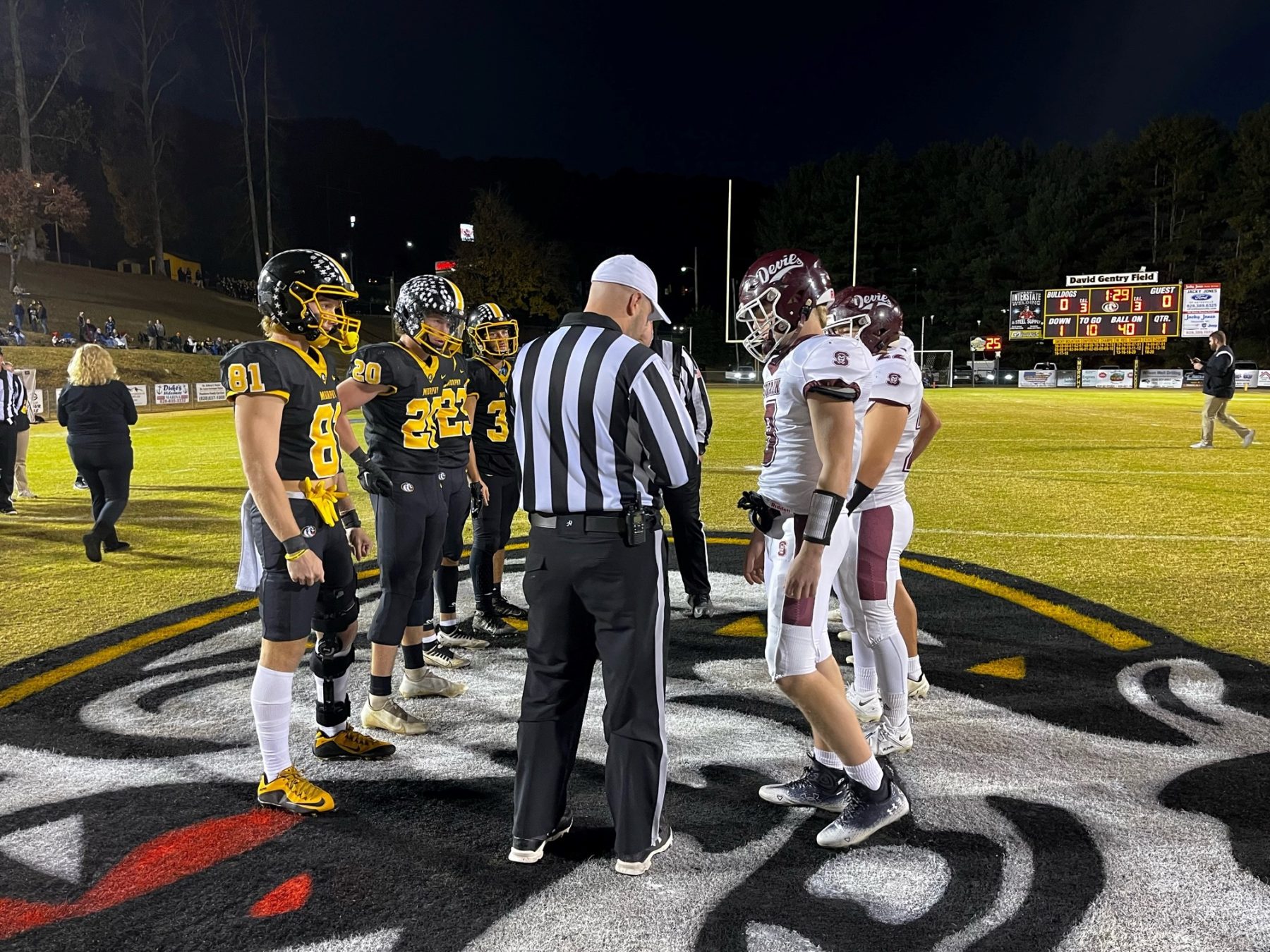 (Murphy) – – Murphy (7-2, 4-0) is rolling to the final game of the season in search of a Smoky Mountain Conference Championship after a 20-to-14 win over Swain County (3-6, 0-4).  This meeting of the Bulldogs and Maroon Devils was filled with too many mistakes.  The roll for the Bulldogs is filled with wobble after a night of mistakes, turnovers (including fumbles and an interception), and penalties calling back at least two touchdowns that reminded players of the unsavory win at Hayesville a few weeks ago.  Murphy had the momentum going into this game after a huge win in Robbinsville showing spectators the dual threat of rushing and passing.  The thrill of the Bulldogs’ skill was still there but haunted by the yellow napkin’s appearance nine times that backed them up for 75 yards.

Injuries and recovering players did not stop Swain County from producing the tough gritty play it has been known to throw at its opponents.  Senior Running Back Gabe Lillard started the game at Quarterback for the healing Junior Reece Winchester.  On its eighth play, the Maroon Devils fumbled to Murphy and Lillard collided with Bulldog defenders for the loose ball.  After a near 20-minute stoppage of the game he was taken out of the game with a left shoulder/arm injury.  Winchester returned to the game at the QB spot.  The loss of Lillard did not stop Swain from posting 235 yards of offense (167 rushing and 68 passing) against Murphy and scoring twice to stay in the game.

The Maroon Devils are probably going to look at film and work on its own mistakes and penalties.  Too many times Swain turned the ball over by fumble or on downs after failing to achieve a first down. Both teams were forced to punt in critical times when they needed to keep the ball moving.  Unlike its previous games, Swain did made their last downs in Murphy territory before punting or a turnover occurred.

First Quarter – Murphy did not waste any time getting into the end zone after Hunter Stalcup recovered the Swain fumble after its initial possession.  Murphy set up the ball at the Swain 43-yard line and handed it off to the Rhinestone Cowboy (Stalcup) making it a 1-play, 43-yard run, using less than 8 seconds on the drive.  Will Joyner nailed the Point-After-Touchdown (PAT) kick.  Murphy 7 Swain 0.

Swain did not handle the ball well and fumbled again to Murphy at the Maroon Devil’s 47-yard line.  The Murphy passing game did not open and the Bulldogs punt it back.  Swain goes three and out and punts to Murphy.  This is the third possession of the night and Murphy is building steam toward the end zone on eight plays that shows the beginning of its penalty trouble, being whistled for illegal procedure and holding and eventually an interception by Swain’s Reese Winchester in the end zone.  Swain takes the ball its own 20-yard line and marches it to the Murphy 44 to end the First Quarter, Murphy 7 Swain 0.

Second Quarter – Two plays into the Second Quarter Swain turns the ball over on downs to Murphy.  The Bulldogs go three and out after a couple of runs plays that resulted in loss of yards and an incomplete pass to Hunter Stalcup.  This time Swain wastes no time to get on the score board by launching a 43-yard pass play to Josh Collins that takes the Maroon Devils to the Murphy 7-yard line.  Junior Running Back/Wide Receiver Josiah Glaspie carries the ball to the end zone for Swains first touchdown with 8:00 left to go.  Kicker Oliver Reyes hits the PAT.  Murphy 7 Swain 7.

While the fans were catching their breath from the Swain TD, Hunter Stalcup decides to strike back.  Rhinestone Cowboy runs 75-yards on the kick-off return for a touchdown with 7:50 remaining in the quarter.  Will Joyner hits the PAT.  Murphy 14 Swain 7.

Swain is eager to jump back at Murphy and picks up the ball at its 30-yard line.  Reece Winchester drops the ball on the snap and recovers losing one yard back to the 29.  No worries as play number two produces a magic hand-off to Running Back Joshua Colins who sprints for a 71-yard touchdown and Reyes parks the PAT with 6:04 left to go in the quarter.

There was plenty of time for Murphy to respond to the Swain touchdown.  The Bulldogs used 13 plays and almost 5 minutes of clock to go from its 40 down to the Swain 18.  This series was troublesome for both teams as Murphy was whistled for a holding penalty and illegal procedure.  The Bulldogs gained some new life on a roughing the passer penalty against Swain and ended up getting to the Maroon Devils 18, where fans thought a final score would be made.  Murphy fumbled to Swain, who ended up running out the clock.  Murphy 14 Swain 14 – The Halftime Score.

Third Quarter – PENALTIES. It seemed like not a single touchdown would be scored in this quarter by either team.  Statisticians and the media corps covering this game stayed busy tallying up penalties and turnovers.  Murphy had the opening possession, which went to Swain on a fumble on its second play.  Swain was forced to punt after suffering procedure, holding, and unsportsmanlike penalties.  Murphy’s second possession made little headway and resulted in a punt after falling back on a fourth-and 15 after a chop-block flag was thrown on the Bulldogs.  Swain on its first play of this series fumbles back to Murphy after a thrilling hit from Kyle Willard.  Murphy picks up the ball on its 48 and drives 12 plays and 52 yards in 5:23 to score at the buzzer.  This drive was one of the best for Murphy, which only received on penalty for holding along the way.  Cole Laney, Hunter Stalcup, and Trenton Russell kept the ball on the ground and moving to the 7-yard line.  Cole Laney ran into touchdown town to make the final score of the night.  Will Joyner missed the PAT.  Murphy 20 Swain 14 – end of Third Quarter

Fourth Quarter – Murphy’s notion to win the game is keep the ball on the ground, run the clock out, possibly score again, and play stellar defense.  Swain saw the possibility of scoring and stepping out ahead of the Bulldogs with a one-point advantage.  The Maroon Devils dropped back behind the line of scrimmage to launch a few shallow screen passes that caught Murphy off guard and gained good yardage.  Fumbles and penalties erased the good schemes and ultimately placed the ball back in Murphy’s hands to go to Victory Formation in the closing moments of the game.  FINAL – Murphy 20 Swain 14

This game is not the best demonstration of the strength and skills by either Murphy or Swain. The Maroon Devils killed its offense with four turnovers, through fumbles for loss and turnover on downs.  Murphy crippled its offense with three turnovers on two fumbles and an interception that cost a touchdown.  At least two more touchdowns were erased by penalties.  The play in the trenches was not that bad.  Most of the offense from both sides produced positive yards.  From a defensive perspective that may not be the desired result.  Penalties and turnovers were the worst enemy to the Bulldogs and Maroon Devils, which Murphy Quarterback Cole Laney says has to change this week if you want to finish the season strong.

Swain County’s offense put up 235 yards of offense with 167 coming from the ground game and 68 from passing.  Murphy had the ball a little longer for 57 plays that produced 327 yards of offense 208 from rushing and 119 from passing.  Murphy Quarterback Cole Laney completed 8 of his 19 passes and had the one interception.  Bulldog Senior Wide Receiver Cameron Grooms, a favored target for Laney says the passing game for Murphy continues to develop for positive results.

Hunter Stalcup had the ball 23 of the 57 total offensive plays and ran for 167 yards, the most for any player on the field.  This places Stalcup at 1,318 yards on the season for about 10 yards per carry.  Regardless of the win and some positive results in the game, Murphy Head Coach Joseph Watson says there a lot of work for Murphy this week to prepare for the last game of the regular season.

Cameron Grooms had 4 receptions for 57 yards

Hunter Stalcup had 1 reception for 19 yards

Dozer Mashburn had 1 reception for 19 yards

Dominick Rummler had 1 reception for 10 yards

Josh Collins had 3 receptions for 62 yards

Austin Jenkins had 1 reception for 6 yards

The Smoky Mountain Conference Championship will be on the line for the Murphy versus Andrews (9-0, 4-0) game this coming Friday night (October 28th) at Murphy’s Bob Hendrix Stadium/David Gentry Field.  The Wildcats defeated the Robbinsville Black Knights 28-to-12.  The Wildcats took control of the game 14-to-nothing through the first and traded scores through the next two quarter to polish off Robbinsville and remain undefeated.  Get to the Hill in Murphy early as Cherokee County may close down and everyone who can, will probably attend this game.

Swain County will have its work cut out as the Maroon Devils travel to Cherokee (2-7, 1-3).  The Braves played the Hayesville Yellow Jackets tough and eventually see-sawed back and forth to get a TD up.  The Braves will look to finish the season strong and bring its scary front line to this game for a start to the trick-or-treat weekend.

Stay connected to Team FYN Sports for more details on these games.  Inside the SMC is streamed on the Team FYN Sports Facebook page on Thursday nights at 7PM (Eastern).  Team FYN Sports will announce its game coverage of the Murphy versus Andrews game later this coming week.

Murphy honored its seniors on Friday night before the game.  Enjoy the photo gallery of the seniors.  Good luck and best wishes for the remainder of a great high school year and graduation this coming spring. 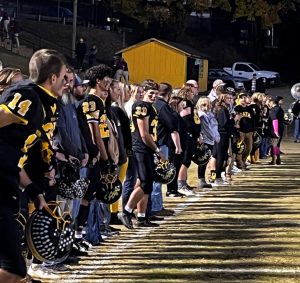 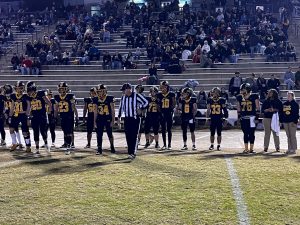 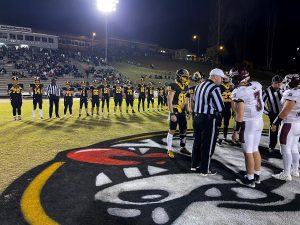 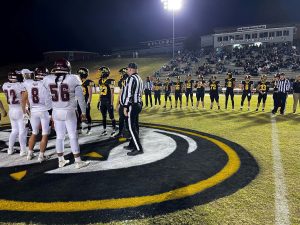