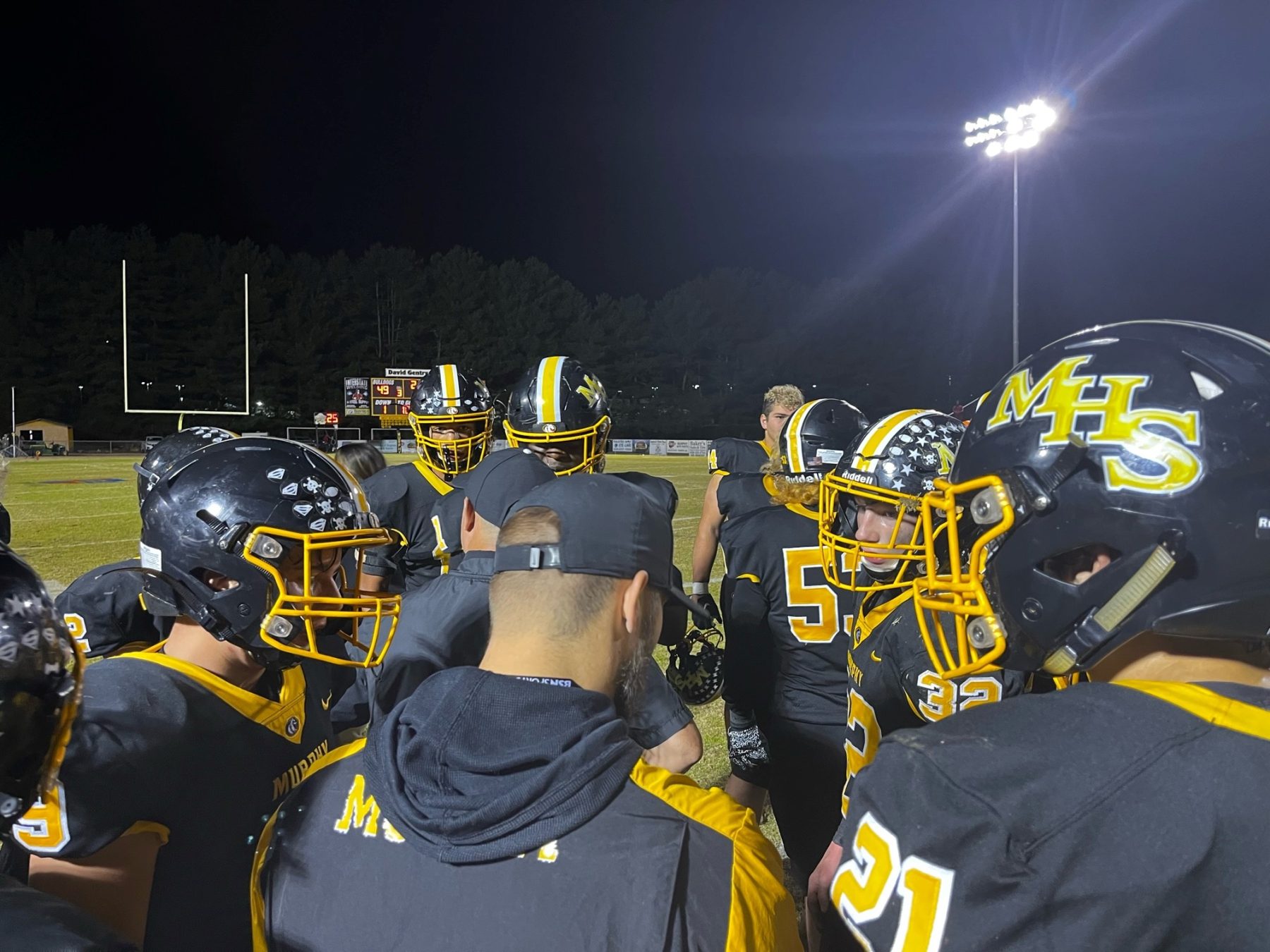 Editorial Note : This article is dedicated to the memory of Ms. Joy Watson, mother to Murphy Head Football Coach Joseph Watson, who passed unexpectedly this past week.  Joy is an unwavering supporter of Murphy High School Athletics and always in our hearts for her love and dedication to Coaches, Players, and those who are Bulldog Family.  Wherever the Bulldogs are, she is in their hearts.  She lived up to her name bringing us JOY.  G, you are missed! 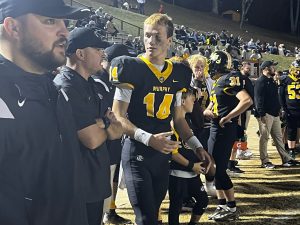 (Murphy) – – Like a rocket sled on rails the Murphy (8-3) is headed to the second round of the North Carolina High School 1-A state football play-off after a 49-to-20 win over the Albemarle Bulldogs.  The Bulldogs formed a convoy to the end zone Friday night like an old CW McCall Song as they tore up their swindle sheets and left them setting on scales then let them Bulldogs roll.  Instead of heading for Omaha, they headed for touchdown town on almost every possession in the first half scoring seven times.  Murphy Junior Running Back Hunter Stalcup hit the end zone gate doing 98 three times and racked up 217 yards rushing to lead the convoy.  The Rubber Duck in this story is Quarterback Cole Laney who hit the air four times for 124 touchdowns including two touchdowns to his fellow Bulldog truckers Dozer Mashburn and Trenton Russell.  Russell and John Ledford carried the pay load for two more touchdowns on the ground.  Defensively, well mercy sakes they kept the bugs off their glass and Albemarle off their…with a second half rolling clock because Murphy had a 49-to-nothing lead at the half.  Well they’ll catch you on the flip side in round two when the East Wilkes Cardinals come to town.

Efficient Football on good tempo and stellar defense set the night for the Murphy Bulldogs.  The Albemarle Bulldogs would not find any momentum and struggled to roll out drives into Murphy territory or convert to first down in the first half.  Murphy took the ball to open the game and drove 67 yards to open the show on 8 plays in 3:28 to land the first touchdown.  The touchdown might have hit the score board earlier, except a 46-yard Hunter Stalcup run was called back on a holding call.  The Rhinestone Cowboy, Stalcup, who has collected more than 17-hundred yards rushing this season, hit the end zone door on a 4-yard carry to begin the 7-touchdown night, which was set up from a 37-yard pass play from Cole Laney to Cameron Grooms.  Stalcup ran the 2-point conversion.  Murphy 8 Albemarle 0.

Murphy is now moving with lots of momentum again after its Ryan Payne intercepted Sophomore Quarter Back Dre Davis and took the ball to the Albemarle 18-yard line.  Murphy was flagged for a penalty and Cole was sacked in this possession. Murphy sent Stalcup on a 12-yard run to score touchdown number two after a 5-play 1:10 minute drive.   The Point-After-Touchdown (PAT) kick by Will Joyner was no good and Tommy Crapse attempted to pick up the ball and run for two-points, which was stopped by Albemarle.  Murphy 14 Albemarle 0.

One play, 69 yards, and a quick moment was the only thing needed for Trenton Russell to sprint to the end zone with 3:44 left to go in the first quarter.  After two consecutive possessions Albemarle was unable to convert to a first down and punted to Murphy.  Murphy started its drive from the Albemarle 47 and used 1:02 to get to the 6-yard line.  John Ledford dashed into touchdown town.  Will Joyner hit the PAT.  Murphy 27 Albemarle 0 to end the first quarter.

Albemarle appeared to have some energy built up to begin the second quarter.  Sophomore Running Back Kaine McClendon carried for Albemarle’s initial first down and helped get the ball into Murphy territory for the first time.  Albemarle turned the ball over on downs to Murphy.  On its first play, Cole Laney hit Dozer Mashburn for a 60-yard pass play to score touchdown number five with 9:32 to go until the half.  Will Joyner nailed the PAT. Murphy 34 Albemarle 0.

The sixth Murphy possession produced the corresponding touchdown.  Beginning on the Murphy 35, the drive was four play in 1:02 over 65 yards for a 15-yard touchdown pass play from Cole Laney to Trenton Russell with 5:43 left until the halftime break.  Hunter Stalcup ran the 2-point conversion.  Murphy 42 Albemarle 0.

Get a second half rolling clock is on the Murphy Bulldogs mind at this point.  Albemarle is unable to get a first down through the stingy Murphy defense and punts.  Murphy begins its last scoring drive at its own 38.  Burning up 3:14, Murphy moves the ball down to the Albemarle 12 and hands off to Stalcup for one last touchdown run.  Will Joyner parks the PAT.  HALFTIME Murphy 49 Albemarle 0.

Murphy utilizes almost all of its reserve players during the second half, which features Freshman Quarterback Brady Grant, Sophomore Running Back Jonah Hedden, Will Shore, Kenyon Nichols, and Kaiden Davis, and some running by Will Shore.  And I needed to mention Sophomore Chandler (Steve-News) Nernes got to play too.  Murphy did not score in the second half.  Against the Murphy reserves and a rolling clock, Albemarle scored once in the third quarter on a pass play and twice in the middle and end of the fourth quarter.  FINAL Murphy 49 Albemarle 20. 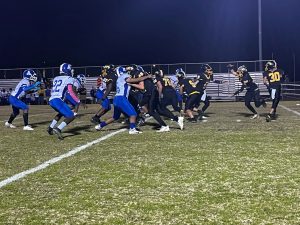 Murphy utilized this game to hone its game from last week’s loss to Andrews.  The rushing game appeared to be flawless with excellent blocking and protection from the line.  Cole Laney did not have a ton of passes, but the yards after pass and the result of the completion was golden for the Bulldogs.

Rushing may appear to have come easy for the Rhinestone Cowboy Stalcup, Trenton Russell, and John Ledford.  Stalcup says the rushing game did take some effort but produced good results.

Well pleased and comforted with the win, Murphy Head Football Coach Joseph Watson praised the team for its obvious offensive prowess in this game.  He pointed out the defense was equally deserving of praise as it limited Albemarle to 20 points, which came very late in the game.

Dozer Mashburn had 1 reception for 69 yards (One for Touchdown)

Cameron Grooms had 2 receptions for 40 yards

Trenton Russell had 1 reception for 15 yards (One for Touchdown)

Will Shore carried the ball 2 times for 8 yards

CJ Ellis had 2 receptions for 12 yards

Jason Wall had 1 reception for 2 yards (One for Touchdown)

Jaylen Pinkney had 1 reception for 1 yard

East Wilkes (9-2) routed the Thomas Jefferson Gryphons (2-9) 44-to-14.  East Wilkes is stacked with experienced seniors.  The Cardinals finished third in its conference at 4-2 and presents a tenacious defense that has given up only 12 points per game on average.  The offense averages 33 points per game.  Based on our archives, this may be the first meeting between the Murphy Bulldogs and the East Wilkes Cardinals.  East Wilkes is coached by Jonathan Wilmoth.  Wilmoth served as the Mount Airy High assistant football coach.  Stay connected to Team FYN Sports for more details on its coverage of the Murphy