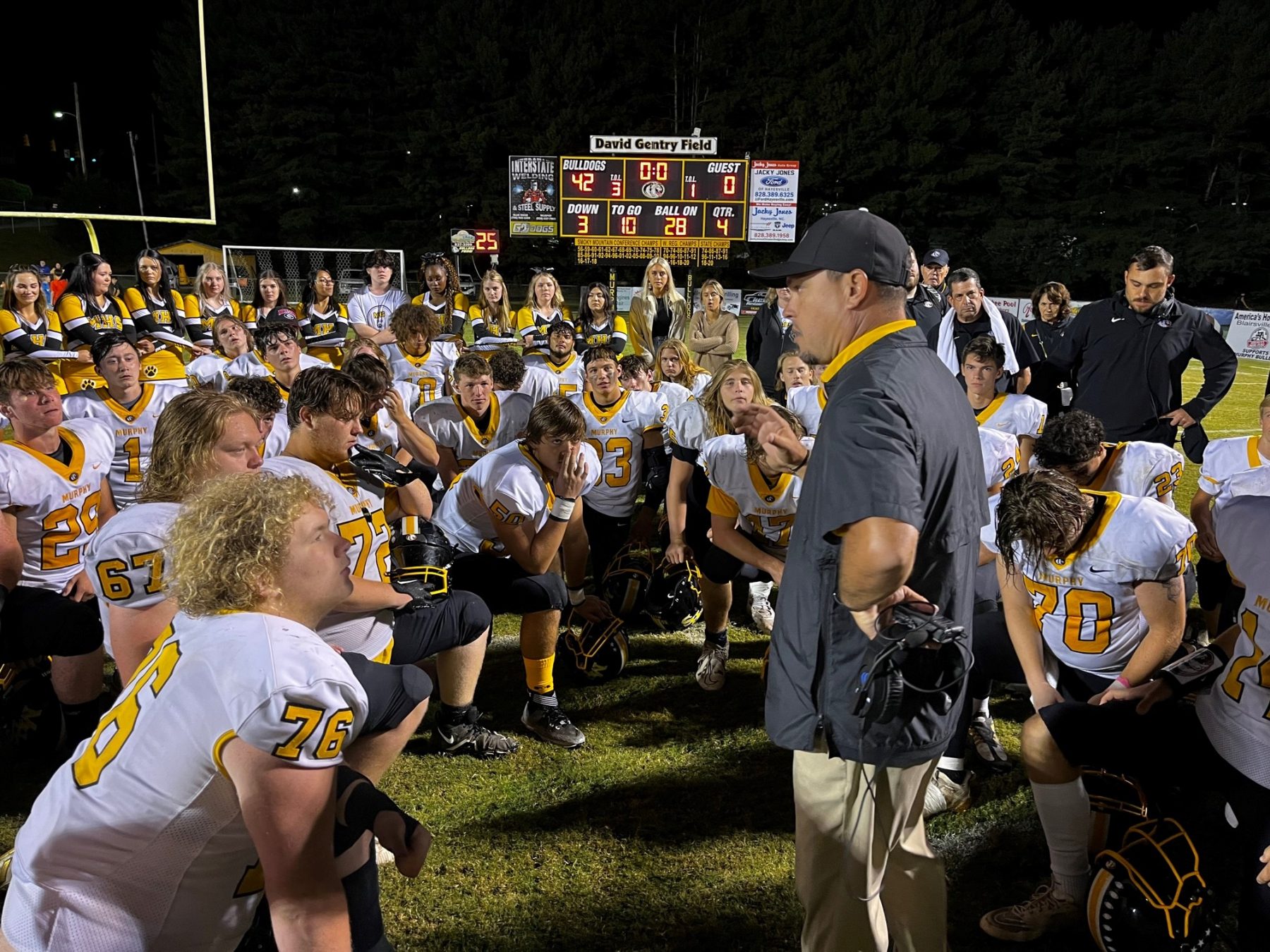 Murphy Moves to 3-2 and Gets Ready for Conference Play.  Youth Football Players and Cheerleaders Honored

(Murphy) – – Four plays into the game the Murphy Bulldogs (3-2) struck first with a 15-yard touchdown pass from Quarterback Cole Laney to Running Back Hunter Stalcup and didn’t look back.  Hunter carried the ball for a two-point conversion and set the tone for the first half.  Not far into the game the goal was set to get a running clock in the second half by managing a 40-point lead over the New Faith Christian Academy Titans.

Tempo is the key to first half play for the Murphy Bulldogs.  It was a great setting for Murphy to exercise some ghosts from its house that arrived after last week’s football game against Fannin County.  Through three possessions there was not waste of time and effort to move the ball and take advantage of the Titans’ penalties and mishandling of the ball.  New Faith Christian Academy did not have skilled players to punt and kick the ball which forced the Titans to go for fourth down possessions where other teams may have punted or pushed the Bulldogs back into deeper field positions.  Taking over deep in Titan territory, Hunter Stalcup scored his second touchdown on a 13-yard carry and ran another 2-point conversion with 7:40 left in the first quarter.  The Bulldogs came up a bit short on its next possession and allowed Kicker Will Joyner to nail a 28-yard field goal to end the Quarter 19-to-nothing.

The Bulldog defense is back on its toes after this meeting with New Faith Christian Academy.  It drilled the Titans back into its end zone and brought down a ball carrier for a safety.  Instead of looking for bell-cow runner Stalcup, Murphy leadership decided to go to the air.  Cole Laney tossed a 21-yard pass play to Dozer Mashburn to rack up another touchdown with 9:46 to go in the second quarter.

The Titans picked up its initial first down midway through the second quarter, but it was not enough.  After turning the ball over on downs, Jonah Hedden ran the ball five yards and Joyner aced the PAT to make the score 36-to-nothing.  The dagger in this game for the Titans came with 3:26 to go in the half when Trenton Russell pulled down an interception.  Getting the ball to the Murphy 42-yard line after a good run from Hunter Stalcup set up a 58-yard pass play to Dominick Rummler to go to touchdown town.  Joyner added the PAT to make the final 42-to-nothing.

The second half highlighted some fresh faces.  The Bulldogs set most of its starters on the sideline and replaced Cole Laney with Wyatt Simmons, who has played a majority of this season in the Murphy defensive secondary.  With a rolling clock clicking away, Murphy called most of its plays on the ground and melted the clock.  Simmons, Kaiden Davis, and Kenyon Nichols did most of the running, which was angled at moving the ball and keeping it out of the hands of New Faith Christian Academy.

Murphy Quarterback Cole Laney is proud of the Bulldog effort in the game and how his team worked to protect runners and bring opportunities to score and defend.

Murphy Junior Running Back Hunter Stalcup had another big night for the Bulldogs.  Stalcup says the focus now is on doing well in the next five weeks as the conference opponents will bring bigger challenges.

This weekend is the official change of seasons, as you can feel the hot days and crisp cool nights.  The season is not the only thing changing.  Non-conference season is over, and the Smoky Mountain Conference season is beginning.  Murphy’s game with Cherokee next week will present some new challenges as it faces five touch teams gunning for the conference title and good standing for the state play-offs.  Murphy Head Football Coach Joseph Watson told his team after the game, new and more diligent work is needed from the Bulldogs to be a successful team.

The Cherokee Braves will be the next opponent for the Murphy Bulldogs at David Gentry Field/Bob Hendrix Stadium this coming Friday night (September 30th).  The Braves (1-4) may appear to be struggling if you only look at their record.  Aside from the 37-to-nothing loss to Smoky Mountain in the beginning of the season, Cherokee has not been out of or been hammered by opponents.  The Braves also played closer to the Franklin Panthers, who handed Murphy its first loss quite handily 24-to-7.  Murphy will need to anticipate good running from Calhoun and Driver and a more solid defense than it saw this week.  More details on Murphy and Cherokee will come this week.  Stay connected to Team FYN Sports for more game details. 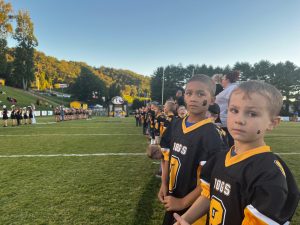