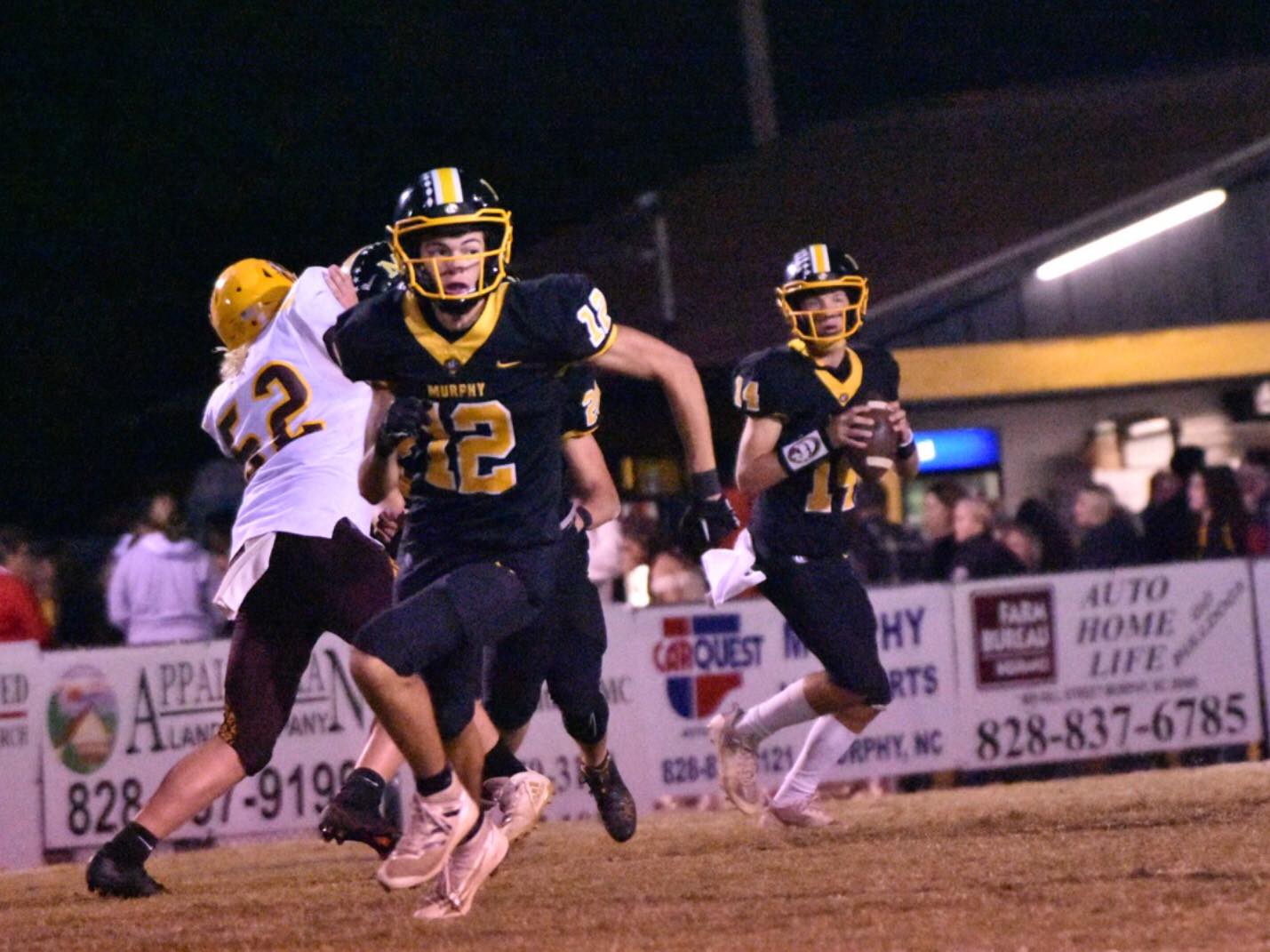 (Murphy) – – Murphy (4-2) is a game up in the beginning of the Smoky Mountain Conference hunt for a Championship hunt.  The Bulldogs burnt almost 18 minutes of the first half and 30 minutes of the entire game on offense to control the Cherokee Braves (1-5) in Thursday night’s 49-to-14 Conference win.

The stats are showing a sterling game with the Bulldogs gaining 445 yards of offense; Running Back Hunter Stalcup rushed 16 times for 193 yards and had 5 total touchdowns; Cole Laney threw three touchdown pass plays and completed 7 passes for 148 yards, including 3 touchdowns.  The Bulldogs did well on the rush to gain almost 8 yards per carry and 21 yards per pass.  Most of the passing was for long yardage rather than a hot route or screen play.  Can you complain any about the offensive performance?  Running Back Hunter Stalcup says not really.

Murphy Quarterback Cole Laney is praising the Bulldogs offensive and defensive showing in the game.

Cherokee Braves are showing some plays where they have the skills to move the ball and get to touchdown town.  Thursday night’s effort was obviously not enough to get passed the Bulldogs.  The first couple of possessions were three-and-out and the Cherokee defense did not have any luck stopping Murphy.  Late in the Third Quarter Cherokee’s Tso Smith rifled a pass to Chase Calhoun who “took it to the house” on an 86-yard sprint for the first touchdown.  The Braves managed to get the ball into good field position for a final fourth down Calhoun TD-run to complete its scoring.  Tso Smith finished the night with 111 yards passing and 59 yards rushing to help keep the Braves competitive.  The ground game was not a good match for Murphy’s defense that highlighted Mason Thrasher, Jeremiah Dickey, and Ricky Queen locking down on Smith and Calhoun’s run attempts.  Murphy Head Football Coach Joseph Watson says you can definitely see the threat the Braves put forth is you take Cherokee lightly.

The Smoky Mountain Conference will get tougher for both teams.  Bulldogs and Braves will need to step up their play.  There are some costly mistakes the Bulldogs and Braves endured that could have made greater changes to Thursday’s outcome.  The start of the Fourth Quarter, without question, the die is cast for the Bulldogs to take the win.  Cherokee initially had trouble getting offensive strikes started.  The longest drive came in the second quarter when the Braves marched the ball down to the Murphy 46 and opted to pass.  Tso Smith’s attempt was picked off by Murphy’s Wyatt Simmons that stifled the Braves efforts.  About five minutes later, Cherokee gained some momentum and went back to the air and Murphy was able to deflect Smith’s passes or the Braves could not connect with Otter and other intended receivers.  Cherokee was did not helping itself with a few slipped snaps, delay of game, or offside penalties. 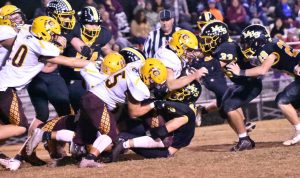 Murphy is probably wanting to go back and reclaim a few touchdowns its missed in the early stanzas of the game.  The Bulldogs didn’t waste much time in its initial possession to get up the field on Hunter Stalcup’s back and into the end zone for a pass that was incomplete.  No worries!  A play; a measurement; and back into the end zone Hunter goes like the Rhinestone Cowboy I tell you he is.  Then we see Murphy coaches bent over upset to see a flag for illegal “chop” blocking that brings back the second would-be touchdown.  Eventually Cole hits Hunter and the points go on the board.  The next big possession plays out the same way with a few illegal procedure calls and a sweet pass to Cameron Grooms that would have been six or a 64-yard pass plays that comes back for holding.  The challenges from this game are correctable and will need attention as both teams move through the conference.

Murphy is set with good delivery from its offensive protection to let its rushing and passing game flow.  That is evident from five Hunter Stalcup touchdowns on the ground and from the air.

Touchdown One:  After driving to the 3-yard line and looking for a way to the end zone, Quarterback Cole Laney finds Hunter Stalcup for a pass to the corner.  Will Joyner nails the Point After Touchdown field goal (PAT) with 5:43 to go in the First Quarter.  Murphy 7 Cherokee 0

Touchdown Two:  Cherokee punts back to Murphy and the Bulldogs drive to the 12-yard line.  Stalcup drives into touchdown town for the second time with 10:25 to go in the Second Quarter. Joyner is good on the PAT.  Murphy 14 Cherokee 0

Touchdown Three:  Cherokee begins to build a drive into Murphy territory but suffers an interception to Wyatt Simmons.  Wasting no time, Cole Laney hits Cameron Grooms for a 65-yard pass play to light up the score board again.  Joyner kicks the PAT.  Murphy 21 Cherokee 0 (Half Time)

Touchdown Four:  Murphy gets the ball to begin the second half.  The opening play is a 55-yard run by Stalcup with 11:47 to go in the Third Quarter.  Joyner nails the PAT.  Murphy 28 Cherokee 0

Touchdown Five:  Cherokee works nine plays to eventually turn the ball over own downs to Murphy.  The Bulldogs get past a penalty and an incomplete pass to have Stalcup go on a sprint to the Cherokee territory.  Eventually Hunter runs in from the Cherokee 35 with 5:13 left to go in the Third Quarter.  Joyner’s PAT is good.  Murphy 35 Cherokee 0

Touchdown Six:  Deep in its own territory, the Braves see daylight.  Tso Smith launches a tight spiral pass to Chase Calhoun for a 75-yard pass play that brings Brave fans to their feet.  Mato Grant hits the PAT with 3:20 left to go in the Third Quarter.   Murphy 35 Cherokee 7

Touchdown Seven:  Feeling good on the passing night, the Bulldogs are on the Cherokee 10-yard line and call for a pass play with 11:52 left in the game.  Cole Laney finds Hunter Stalcup and back to the end zone Murphy goes.  Joyner is good on the PAT.  Murphy 42 Cherokee 7

Touchdown Eight:  Cherokee goes on a good and sustained drive to get to the one-yard line.  Chase Calhoun carries the last touchdown for the Braves with 9:45 to go in the Fourth Quarter.  Grant is good on the PAT.  Murphy 42 Cherokee 14

Touchdown Nine:  Murphy’s starting players are watching from the sideline as the second string and scout team members run the plays.  Number 2 Will Shore makes the final touchdown of the night on a 2-yard run with 2:20 remaining in the game.  Joyner hits the PAT.  FINAL Murphy 49 Cherokee 14. 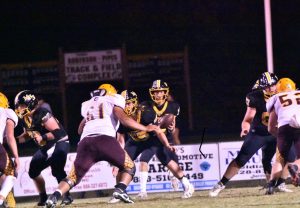 Cameron Grooms had 3 receptions for 84 yards (One for Touchdown)

Hunter Stalcup had 4 receptions for 64 yards (Two for Touchdowns)

Chase Calhoun had 2 receptions for 86 yards (1 for Touchdown)

Kaden Trantham had 2 receptions for 25 yards

Congratualtion to Lochlan Rogers being named the 2022 Fall Homecoming Queen! 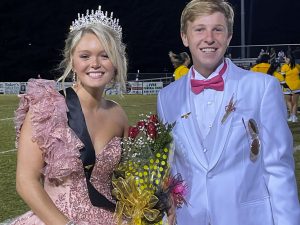