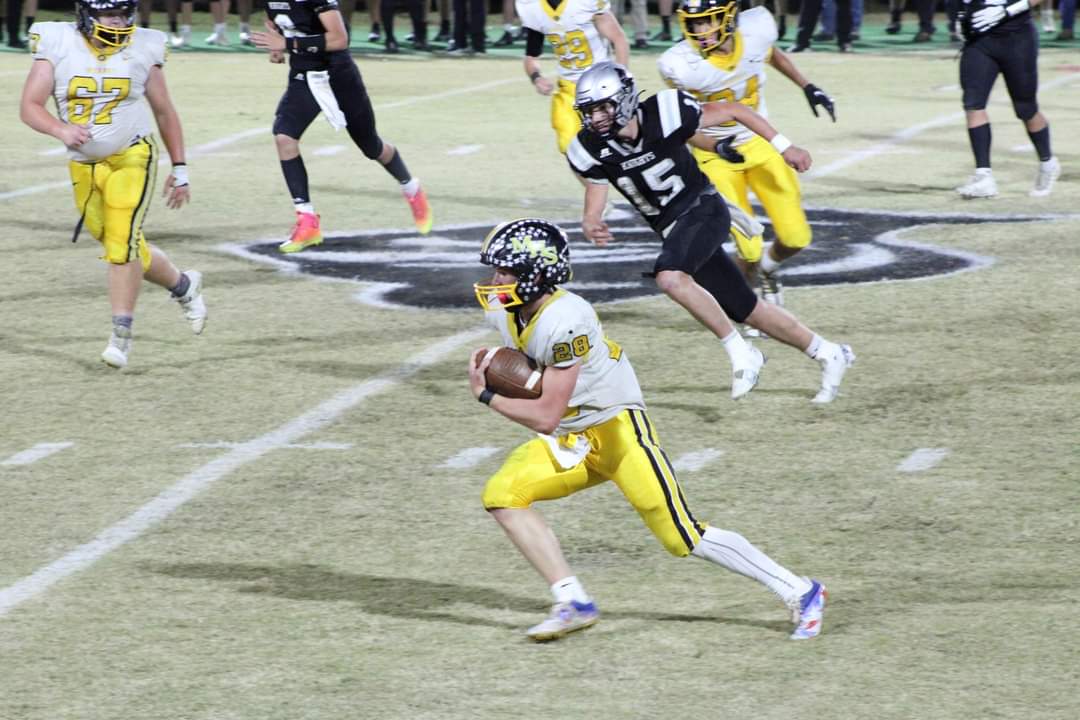 (Robbinsville) – – Murphy Bulldogs and the Robbinsville Black Knights rivalry is similar to what many have liked in the old Atari game Pong.  The dot bounces back and forth and sometimes gets faster until one opponent misses a step; a point is scored; and someone eventually wins. The game rules, strategy, and schemes didn’t change just younger players and coaches with the same determination to win.  During the past few years that model and approach to this game has become more elaborate with unsuspected dynamics and “upgrades”.  Murphy’s Bulldogs (6-2, 3-0) came to play a loved game with the PlayStation 5 approach and surprised the Robbinsville Black Knights (6-2, 2-1) and even themselves.  Murphy had a keen sense of which control buttons to hit while Robbinsville had some trouble with the DualSense Bluetooth controller staying paired up. 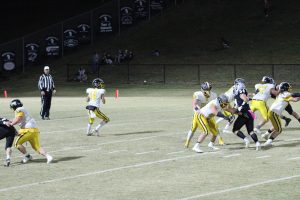 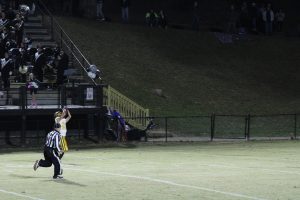 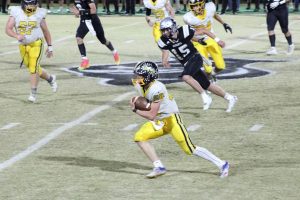 Murphy started the show, with a thrilling pass play technique from Cole Laney to Cameron Grooms, which became the cornerstone of its offense.  Then it introduced the Rhinestone Cowboy feature, Hunter Stalcup, and add one from Trenton Russell for good measure.  Meanwhile, the Robbinsville Black Knights worked Junior Running Back Cuttler Adams and Sophomore Quarterback Bryce Adams all night to threaten an unrelenting Bulldog Defensive attack from linemen Ricky Queen, Brayden Killian, Kyle Willard, and Mason Thrasher who, one more than one occasion blighted the Robbinsville threat with tackles for loss, hurried quarterback plays, and sacks. 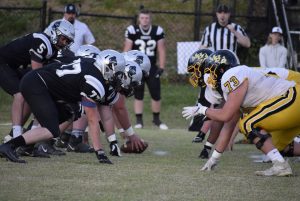 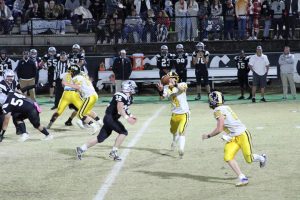 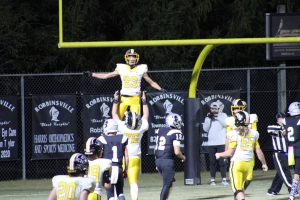 The salient feature in the Bulldog attack is Quarterback Cole Laney locking in on his target to deliver a good passing game to Cameron Grooms and Trenton Russell.  That passing game also included key plays to Dominick Rumler and Hunter Stalcup.  Murphy’s opening touchdown pass is the key to setting the game tempo on its initial possession.  Not too long after the rushing game opened up for Hunter Stalcup.  Robbinsville worked to get its offense going but ended up punting in its first couple of possessions and posted its first points early in the second quarter.  Murphy responded with 3 unanswered touchdowns in a staccato fashion getting into touchdown town and the Black Knight’s offense having to punting and once fumbling for loss.  First half ended Murphy 27 Robbinsville 8.

The scheme is simple in the second half for Murphy: 1) melt the clock; 2) play stellar defense to maintain the lead.  Murphy slowed the tempo a bit in the third quarter by burning up seven minutes before posting its first second-half touchdown at 5:00 left to go.  Murphy scored two additional times on more lengthy possessions in the fourth quarter.  The opening possessions in the second half for the Black Knights did not provide the opportunities Robbinsville hoped to see from Cuttler Adams, which were stopped with a few costly penalties and sacks for loss by Murphy.  Final score Murphy 48 Robbinsville 16.

Good tempo and protection from the line is where Murphy Quarterback Cole Laney credited success in the game.

Knowing expectations and good preparation this week is key to executing a successful game plan in the Robbinsville meeting according to Running Back Hunter Stalcup.  Stalcup had 309 yards rushing and picks up 1,151 yards on the season.  Keeping the momentum going for Swain will be key is the new game for the Bulldogs Hunter says

Murphy Head Coach Joseph Watson says the Robbinsville game was exciting to see in addition to a good demonstration of team effort to make plays that brought about a win.

8:10 Murphy takes over on its 7-yard line after Robbinsville punts.  Murphy moves the ball to its 33-yard line and launches a pass from Cole Laney to Cameron Grooms for a 67-yard touchdown.  Will Joyner nails the Point-After-Touchdown (PAT) kick.  Murphy 7 Robbinsville 0

3:15 Murphy picks up the ball on its own 29 after Robbinsville punts.  On the initial play of this possession Running Back Hunter Stalcup runs 71 yards to touchdown town. Stalcup run a two-point conversion.  Murphy 21 Robbinsville 8.

2:09 Murphy’s Brayden Killian recovers a Black Knight fumble on the Robbinsville 40 to set up a two-play touchdown series.  Hunter Stalcup picks up his second touchdown run from the 35.  Stalcup is stopped on a two-point conversion. Murphy 27 Robbinsville 8.

5:12 Murphy opens up the second half with the ball on its own 25-yard line.  After 10 plays 62 yards (which included a 10-yard penalty against Murphy for holding) in 6 minutes 43 seconds, Cole Laney hits Running Back Trenton Russell for the Bulldogs fifth touchdown from the Robbinsville 13 yard-line. Will Joyner hits the PAT.  Murphy 34 Robbinsville 8

9:08 Murphy began its drive at the end of the third quarter at its own 38.  Using four minutes 8 plays and going 62 yards, Cole Laney found Cameron Grooms for a 26-yard touchdown pass for the Bulldogs sixth touchdown play.  The Joyner PAT is good.  Murphy 41 Robbinsville 8.

5:50 Robbinsville punts to Murphy and the Bulldogs start a 2:09 drive back to the end zone from its 37.  Hunter Stalcup move Murphy to the redzone on a 56-yard carry that eventually ends on the two yard-line.  Stalcup carries finishes the drill at the Robbinsville 2-yard line for touchdown and Joyner nails the PAT for Murphy’s final touchdown.  Murphy 48 Robbinsville 8.

Cameron Grooms had 6 receptions for 136 yards (Three for Touchdowns)

Dominick Rummler had 2 receptions for 51 yards

Trenton Russell had 1 reception for 12 yards (One for Touchdown)

Hunter Stalcup had 1 reception for 6 yards

Caleb Draper had 1 reception for 17 yards

Brock Adams had 1 reception for 7 yards

Carson Lovin had 1 reception for 6 yards

Turner Jackson had 1 reception for 5 yards

The Robbinsville Black Knights will be on the road to face the conference leading Andrews Wildcats.  The Wildcats are ranked Number One among North Carolina 1-A high school football teams (as of October 14, 2022). Andrews (8-0, 3-0) is still undefeated after a 42-to-21 win over the Cherokee Braves.  Murphy will host the Swain County Maroon Devils.  Swain County (3-5, 0-3) is looking to snap a four-game losing streak this week after losing to Hayesville 27-to-7.  MaxPreps had ranked Swain at Number 11 and Hayesville Number 18 among North Carolina’s 1-A high school football teams.  Hayesville will travel to Cherokee (1-7, 0-3) for its next game.  The Smoky Mountain Conference may appear to be taking shape but has surprised fans this week and presents an exciting platform for the next two weeks.  Stay connected to Team FYN Sports for more details and coverage of the coming week’s games.  Tune this coming Thursday (October 20, 2022) at 7PM for Inside the SMC for a preview of this coming week’s games with Jake West and Brandon Stephens.