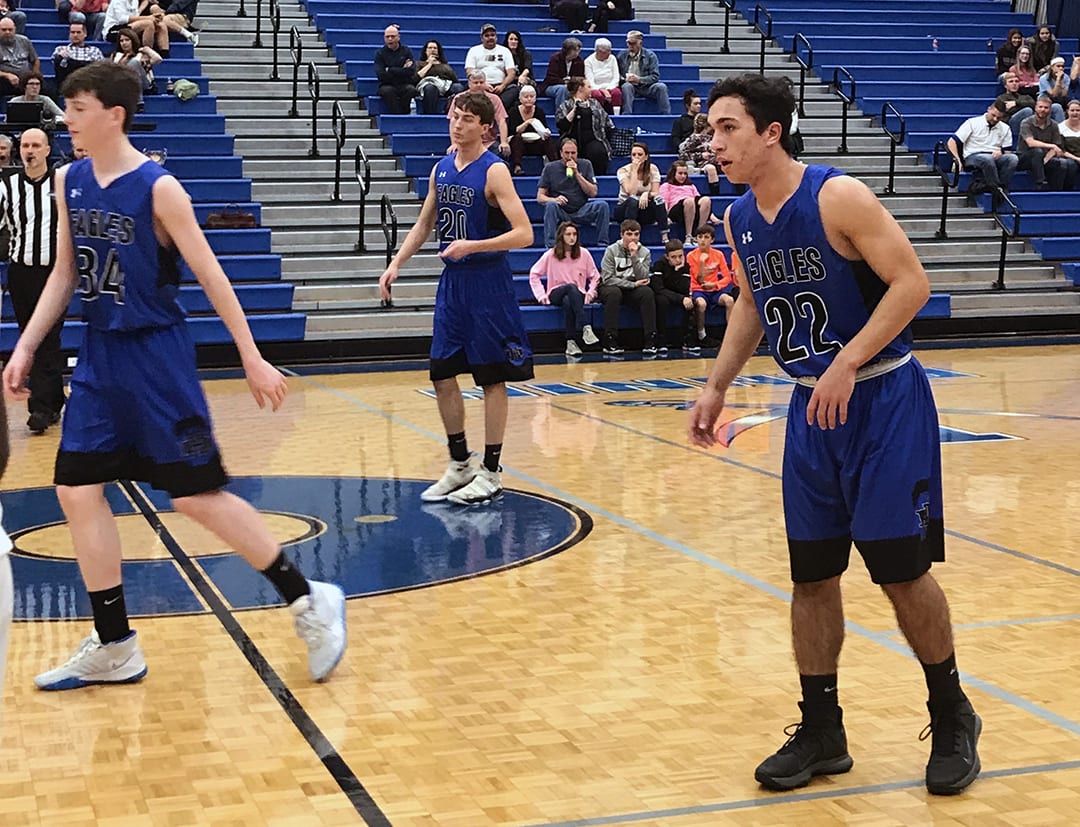 The Eagles from Hiwassee Dam developed quickly in a three-day Thanksgiving tournament at Fannin Co. High in Blue Ridge, GA.

With less than 200 students and playing in the Little Smoky Mountain 1-A Conference in North Carolina, Hiwassee Dam doesn’t get many chances to play teams from higher classifications. 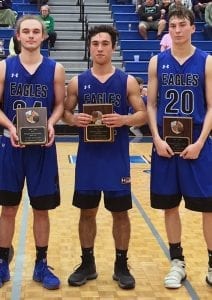 From left, Redford Cheek, Micah Anderson, and Conner Davis were named to the all-tournament team for the Eagles.

The Eagles took full advantage of the opportunity and played each game better than the last.

Through the first two quarters against Pickens, who won the tournament with the victory, the Eagles were proving they can play with anyone.

Four players scored in the first and the defense limited the Dragons to just 12 points.

In the second, Micah Anderson scored seven points, Conner Davis added six, and Sam Bradford scored two to keep pace with Pickens’ 15 in the quarter and head into halftime trailing by just three, 27-24.

In the second half, the Dragons (4-0) pulled away from the short-handed Eagles, using depth and height to finally overwhelm the slowing group in the third to build a 10-point lead at 46-36.

The Eagles wouldn’t go quietly as Davis and Bradford continued to attack. The team put 16 points on the board in the final quarter, but couldn’t slow the Pickens offense enough and fell, 65-52.

Davis finished the game with a team-high 17 points, followed by Anderson with 11, Radford Cheek with nine, and Bradford with seven. Jacob Dockery (4), Seth Hooper (2), and Michael Simms (2) rounded out the scoring for the Eagles.

The day before against Gilmer, Anderson and Simms each scored 10, while Cheek put up eight, Davis scored four, and Hooper added three in the 52-35 loss.

Against Fannin Co. in the first game of the tournament, Cheek scored a team-high 15 points, including going 6-of-8 from the free-throw line. Cheek was just one of the seven Eagles who scored in the game: Anderson, Simms, and Bradford each scored five, Hooper and Davis each scored four, and Dockery scored three.

Anderson, Cheek, and Davis were all named to the all-tournament team for the Eagles.

Hiwassee Dam is slated to begin region play Tuesday, Dec. 3, against Nantahala at home. Tip-off is set for 6 p.m.

To read about the TeamFYNSports Writer’s Player of the Week for the Eagles, click here.