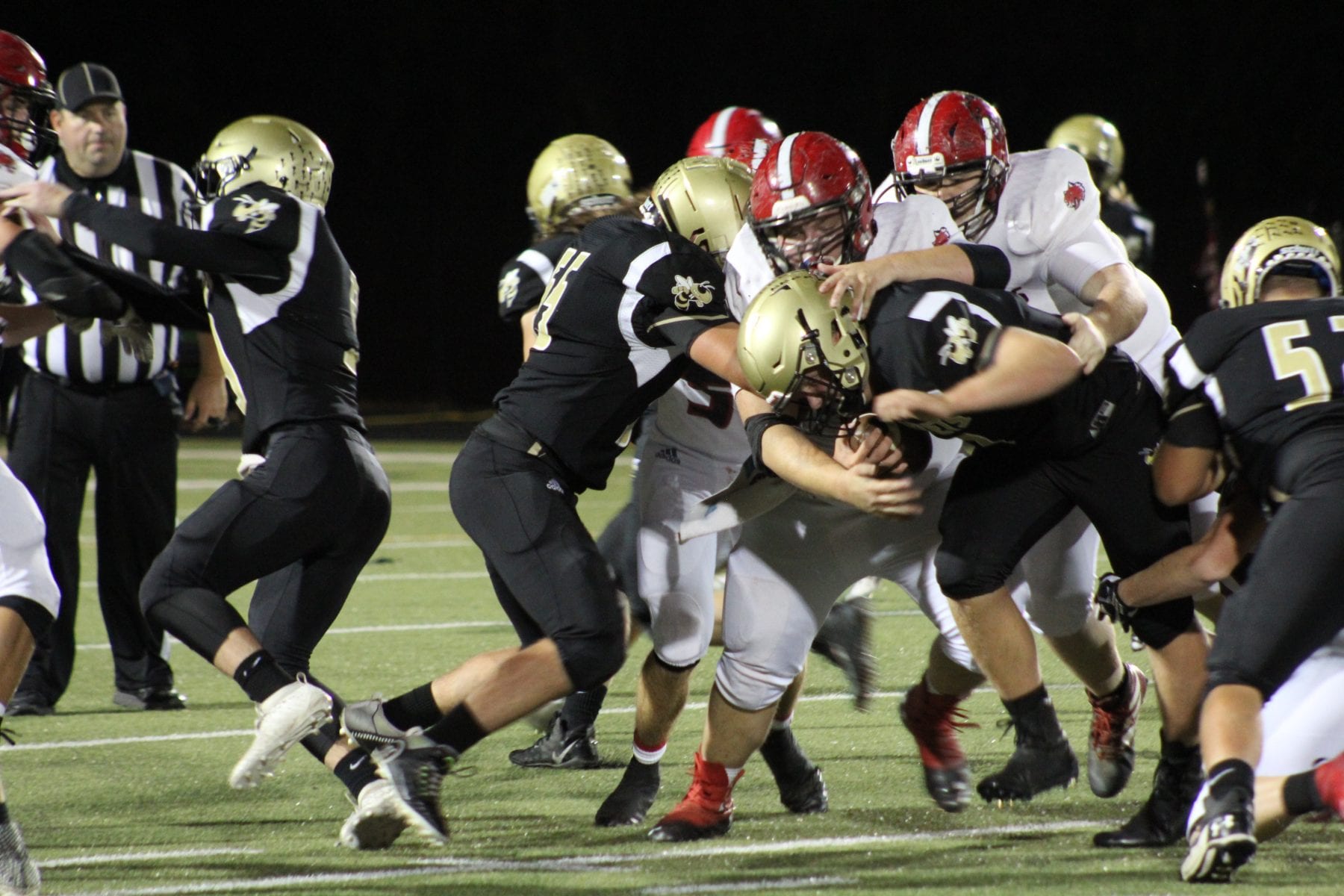 Landon White and Tucker Holloway rushed for a combined 222 yards but it was not enough for the Cats to defeat a determined Hayesville Yellow Jacket team Friday night in Hayesville.

With what may be the final playoff spot on the line the Jackets scored first on a 1 yard run by Blake McClure. The extra point was good and the Jackets took the lead.

The Cats responded with a long drive capped of by a 1 yard touchdown run by Tucker Holloway at the 4:51 mark. 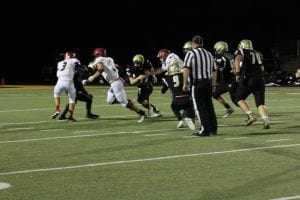 But in a pivotal moment and what would be a foretaste of the kick blocking feast to come, the Jackets blocked the extra point making the score after the first quarter 7-6 with the Jackets on top.

Both teams moved the ball in the second quarter with each team putting up 14 points. The first half ended with Hayesville leading 21-20.

Neither team was able to score in the entire second half, but as the final minute played out the Cats drove to the Jacket 12 yard line with just 11 seconds left.

The Cats lined up for a Holloway field goal attempt that was blocked and sealed the all important conference victory for the Jackets. The Cats return to Hugh Hamilton Stadium Friday night (Oct. 25) to host Copper Basin in a Homecoming match up. Game time is 7:30 p.m. 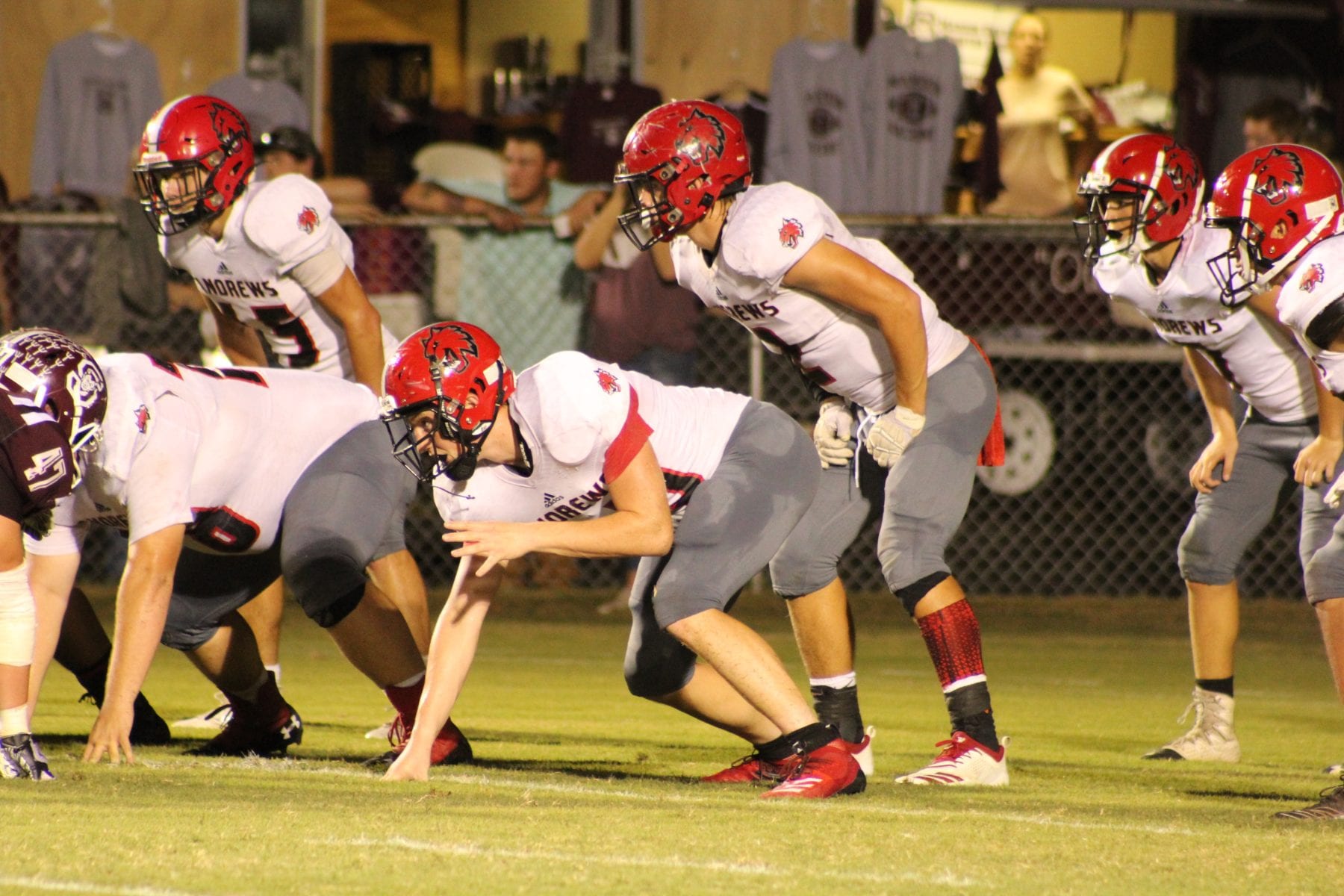 The Swain County Maroon Devils showed why they are a serious conference contender with a solid 48-15 victory over the visiting Wildcats of Andrews.

The Wildcats fall to 2-4 while the Devils improve to 6-0.  The Cats return to Hugh Hamilton Stadium on Friday Oct 11 to host the Cherokee Braves. 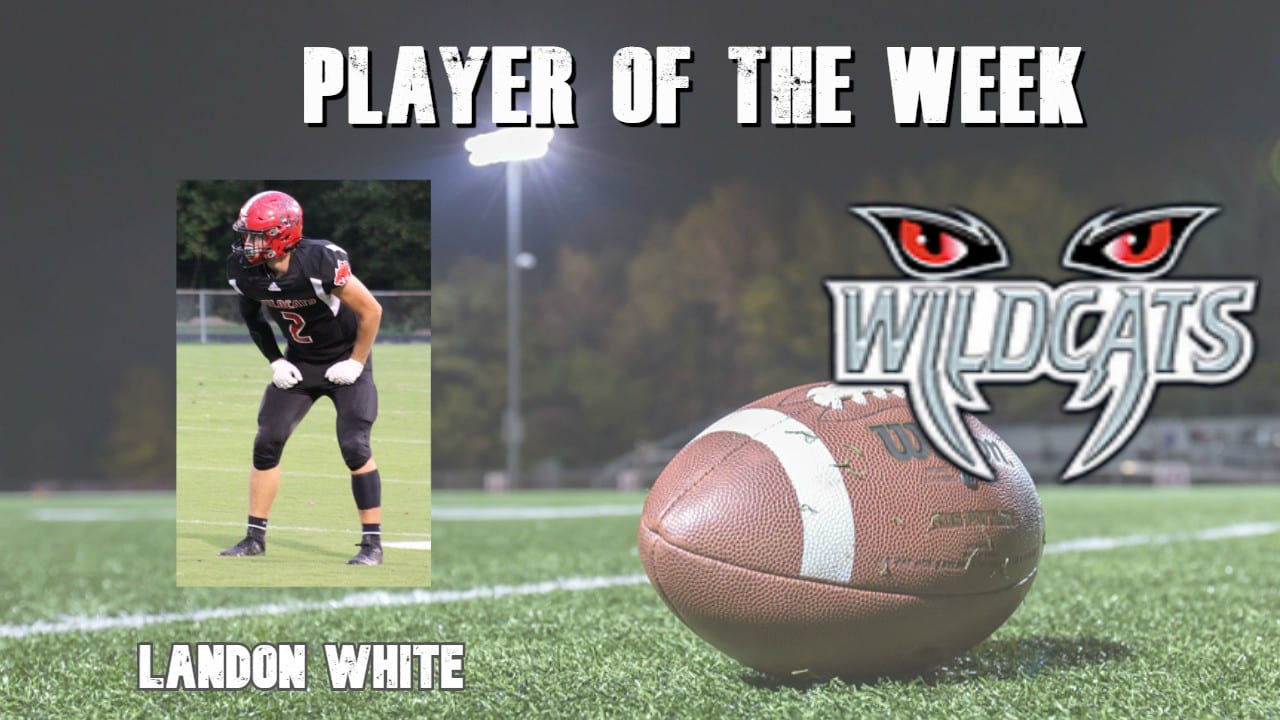 Congratulations to Landon White, this week’s TeamFYNSports Writer’s Player of the Week!

Landon has been playing well all season; he leads the Andrews Wildcats in rushing yards. In the Wildcats’ game against North Georgia, Landon rushed for 172 yards over 24 carries with two touchdowns. He and teammate Gavin Wilson combined for over 300 yards in that game to lead the Wildcats to victory.

Landon also played well against Rabun Gap, rushing for 142 yards over 20 carries with two touchdowns. Finally, he rushed for 68 yards over 18 carries in Friday’s game against Murphy.

Shout out to Landon for receiving this award! 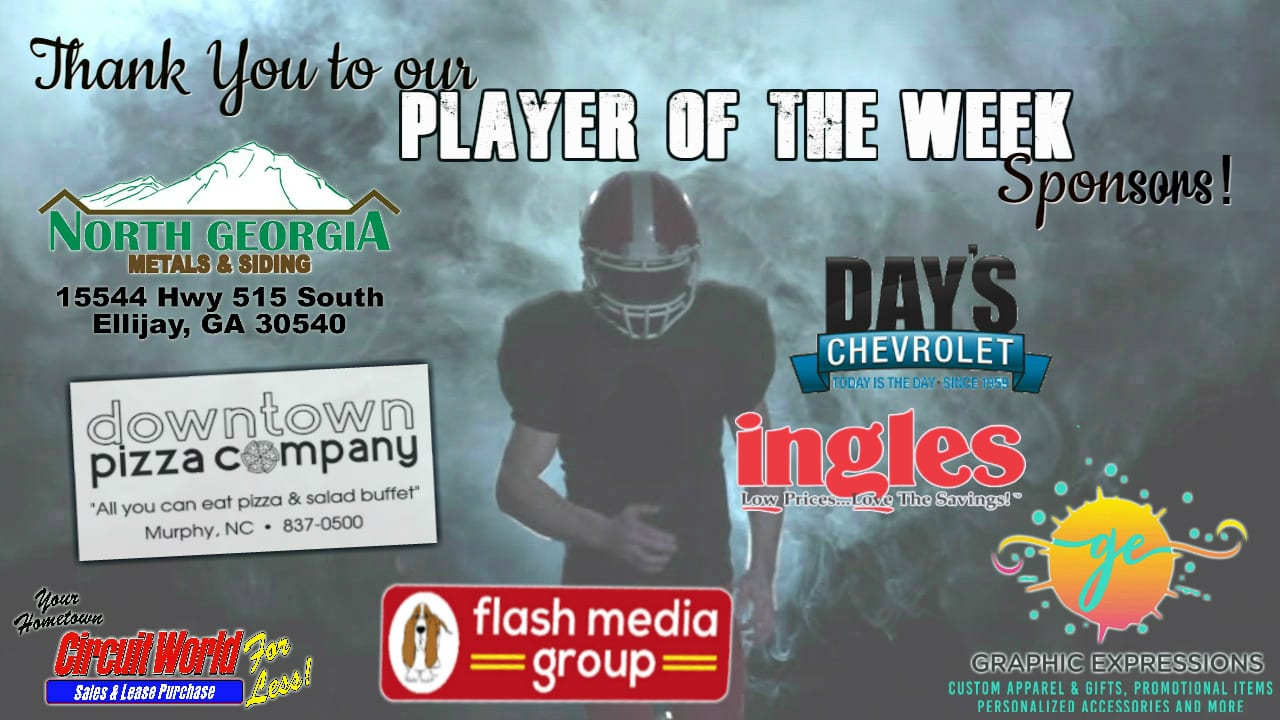 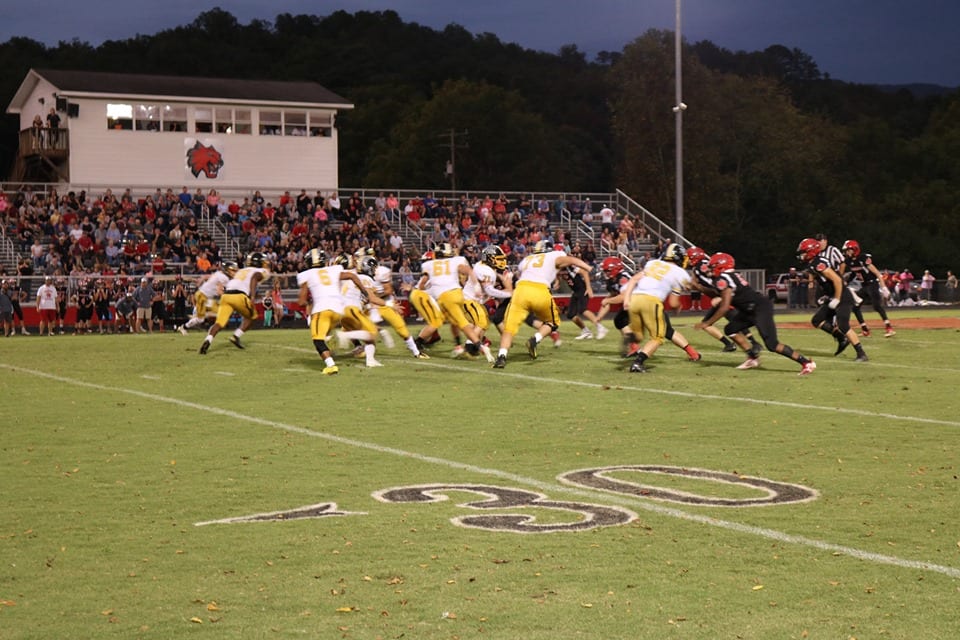 A special report from the voice of the Murphy Bulldogs- J.R. Carroll!

Justice Dorsey and Devonte Murray combined for four touchdowns, and a pass from Kellen Rumfelt to Abe Abling added another. Murphy won 35-7 over Andrews in the Smoky Mountain Conference opener for both teams.

Murray was the workhorse, rushing for 200 yards on 18 carries for the Bulldogs on the ground. In fact, Murray rushed for more yards than Andrews had total, as the Wildcats could only muster 187 yards against a stingy Bulldog defense.

Murphy took the opening kick and was three and out on their first possession. Andrews first possession was just like the Dogs and they went three and out. On the third play of Murphy’s next possession, Rumfelt hit Abling, who was streaking down the sideline for a 50 yard touchdown strike. At the 7:52 mark of the third quarter, Murphy led 7-0. 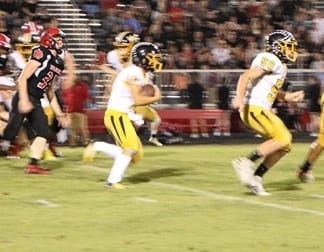 A Murphy Bulldogs carrier during a play.

Murphy’s second score came on Justice Dorsey’s first touchdown run of the night from 19 yards out. Braeden Alexander’s point attempt was good and Murphy led 14-0 at the end of the first quarter.

It was midway through the second before the next score happened, when Dorsey hit pay dirt again from 13 yards out. Alexander added the extra point and Murphy led 21-0 with 6:43 left in the half.

Andrews scored their lone score on their next possession as they drove down to the one yard line and Tucker Hollaway rammed it in for a touchdown. Hollaway also added the extra point. With 4:50 remaining in the half the the score was Murphy 21 Andrews 7.

Murphy added another score in the half, when Devonte Murray added his first touchdown of the night from 14 yards out. At the 3:44 mark, Alexander added the extra point and going into the half Murphy led 28-7.

It was late in the third quarter when Murray found the endzone for his second touchdown of the night. He ran it in from 14 yards out shedding tackles along the way. The point attempt was good and that netted the final Murphy 35 Andrews 7.

Murphy did threaten again in the fourth, but the drive stalled. After getting to first and goal at the six, Rumfelt got caught by the Andrews pass rush for a 15 yard loss. On fourth and 15 Murray was stopped at the one yard line. The ensuing Andrews drive ran out the clock. 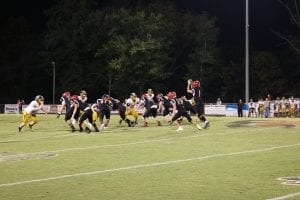 The Andrews offensive line during a play against the Murphy Bulldogs Friday night.

Andrews quarterback Tucker Hollaway was one for three with 10 yards.

Hollaway led Andrews with 13 carries for 79 yards and the Cats only touchdown. Landon White was held to 68 yards over 18 carries.

The Dogs are open next week, while the Cats will travel to Bryson City to take on Swain County, another of the BIG 3 in the Smoky Mountain Conference. 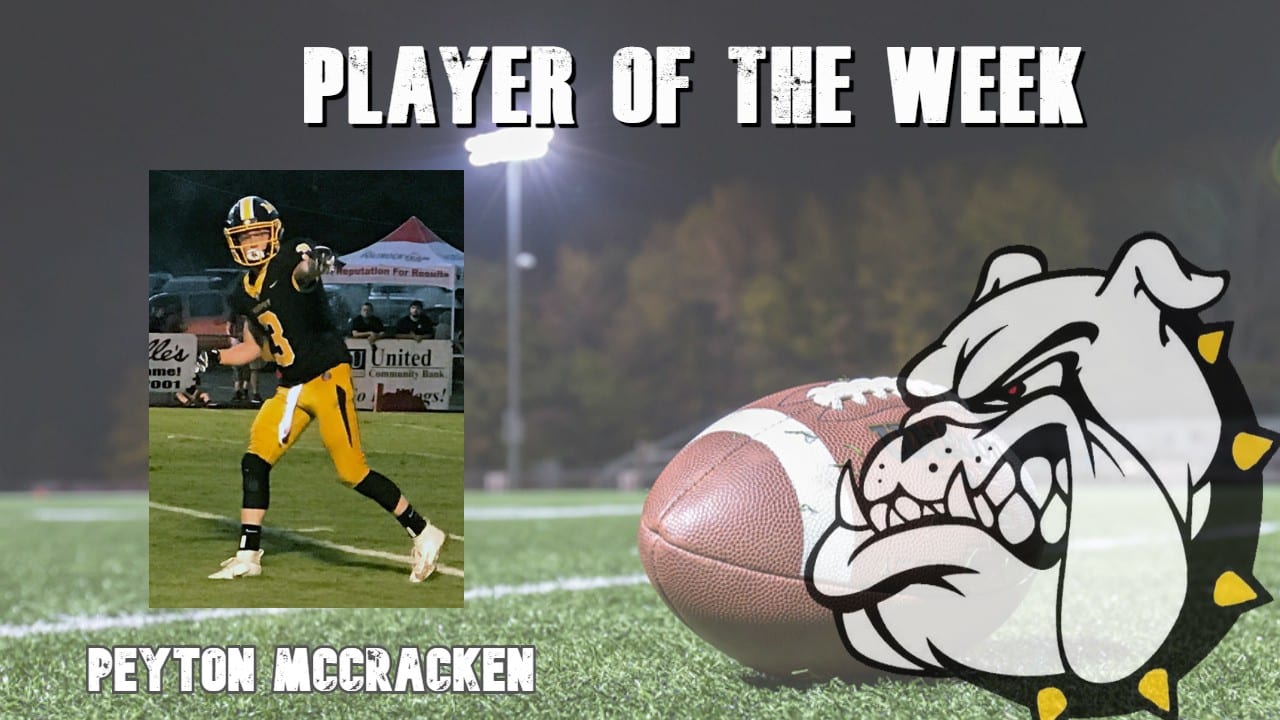 Peyton McCracken was a force to be reckoned with in the Bulldogs game against Life Christian Academy. For this effort, he is the TeamFYNSports Writer’s Player of the Week for the Murphy Bulldogs!

On the first play of the Bulldogs’ first possession, quarterback Kellen Rumfelt connected with Peyton for a 72 yard touchdown pass! This score gave the Bulldogs an early lead of 6-0. Peyton would score twice more throughout the game after catching passes from Rumfelt.

Congratulations to Peyton McCracken- the TeamFYNSports Writer’s Player of the Week in the game against Life Christian Academy! 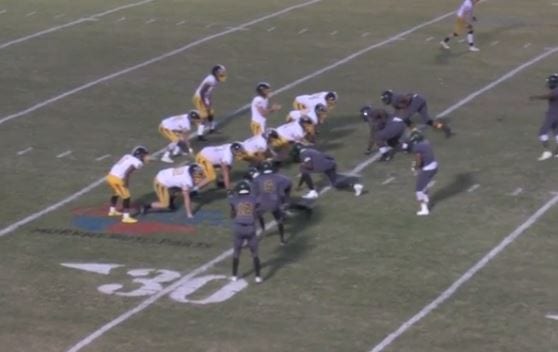 A special report by the voice of the Murphy Bulldogs- J.R. Carroll!

On the first play of Murphy’s first possession, Murphy quarterback, Kellen Rumfelt, rolled out and found Peyton McCracken for a 72 yard. With 8:54 left in the game Murphy led 6-0 as the extra point attempt was wide.

Rumfelt and McCracken would connect two more times before the night was through, leading Murphy to a 45-28 win over a very talented group of athletes from Life Christian Academy. 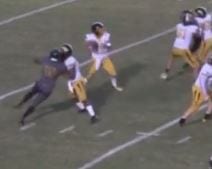 Late in the first quarter LCA took advantage of a Murphy fumble and struck on a 7 yard touchdown with a minute left. The two point conversion failed and the score was tied at 6-6 at the end of the first.

Murphy didn’t let it stay that way long. With only two minutes gone in the second quarter, Ray Rathburn hit paydirt from 10 yards out. Devonte Murray added a two point conversion to take a 14-7 lead. LCA didn’t take long to tie it up with two pass plays, the last being a 21 yard touchdown pass.

Murphy had seen enough of the lead changes and took the lead for good with two minutes to go in the half when Rumfelt and McCraken connected again for a 6 yard touchdown pass. Point attempt was good and Murphy led 27-20 at the half.

A Murphy Bulldogs receiver takes it to the house. Image credit: hudl

Murphy took the opening kick of the second half and Devonte Murray, who rushed for 15 times for 124 yards on the night, got 50 plus of those yards to set the Dogs up for their first score of the second half. A couple of plays later the Rumfelt to McCraken connection hit paydirt again from 12 yards out. The conversion failed and Murphy led 33-20.

The Dogs never relinquished the lead again. Ray Rathburn, who was the leading rusher for the Dogs with 153 yards, scored from 55 yards out later in the third. LCA’s lone second half score came with a 6 yard run for touchdown and a two point conversion to bring the score to Murphy 39, LCA 28. Devonte Murray would seal the deal when he had a three yard touchdown late in the third to net the final Murphy 45, LCA 28.

Rumfelt finished the night with 5 completions for 9 attempts for 102 yards and three touchdowns. He also rushed for a touchdown. The Dogs had two 100 yard rushers- Rathburn and Murray. 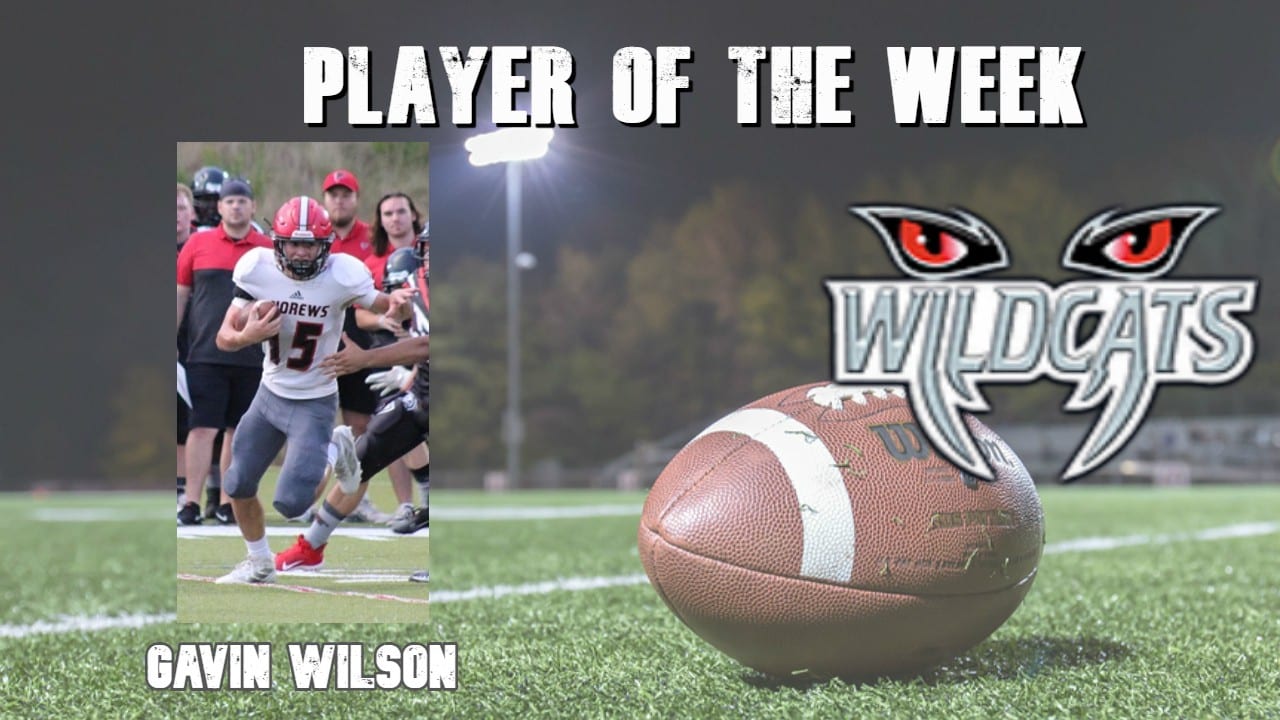 A special report from the voice of the Andrews Wildcats- Scott Fletcher!

Congratulations to this week’s TeamFYNSports Writer’s Player of the Week for the Andrews Wildcats- Gavin Wilson! Gavin played an incredible game against the North Georgia Falcons. He rushed for a combined 333 yards with his teammate, Landon White.

Gavin also scored three touchdowns for the Cats on carries of one, 15 and 49 yards. This award is well-deserved for a hard-working athlete! 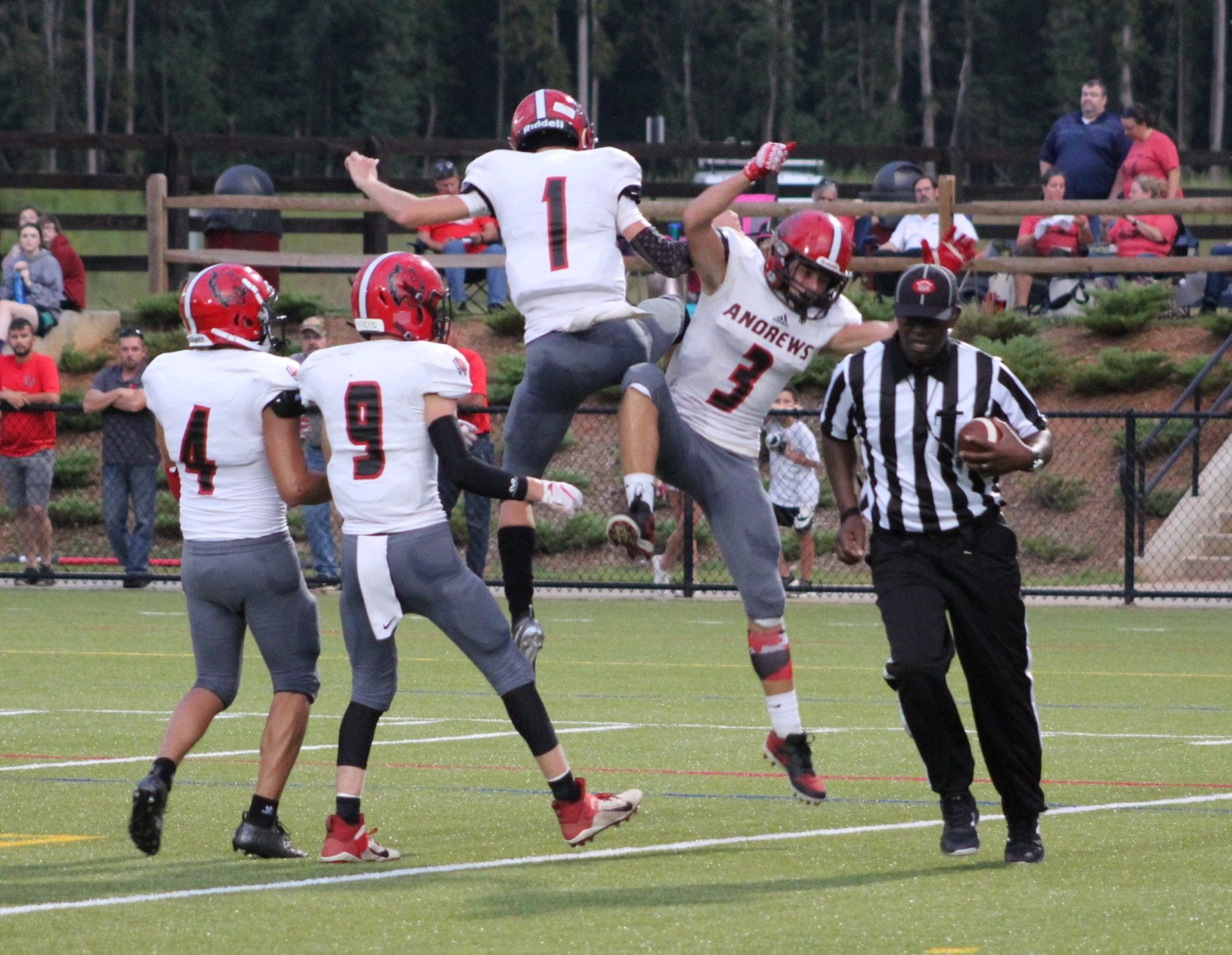 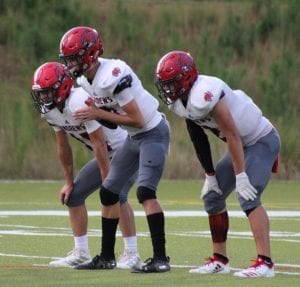 The Cats got on the board first with a 22 yard touchdown pass from quarterback Tucker Holloway to the speedy Gage Gillespie. The Falcons started the scoring in the second quarter with touchdown runs of 30 and 49 yards. Gavin Wilson capped a long Wildcat drive with a one yard touchdown run to end the first half.

The Falcons scored first in the third with a 65 yard pass from Kade Harkness.  The Cats rounded out the scoring in the third with a run of 12 yards by White and a one yard run by Wilson.
In the fourth it was all Wildcats as White powered in the end zone with a one yard touchdown. Quarterback Tucker Holloway scampered for 45 yards and a Wildcat touchdown. Gavin Wilson scored on runs of 15 and 49 yards to put the game out of reach. The Wildcats won the game by a final score of 53-20.
The Cats improve to 2-1 while the Falcons fall to 1-3.  Andrews returns to Hugh Hamilton Stadium this Friday, playing host to Rabun Gap.  Kickoff is slated for 7:30 p.m.
Andrews High School Andrews Wildcats football Wildcats Wildcats football